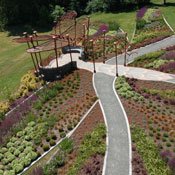 "Dragon Fly Garden" is one of 380 public works of art that Seattle, Wash., has commissioned since 1973. Jackson wants to follow Seattle's lead and allocate funds for public art installations.

Artist Jennifer Dixon's life-size tree installations fill the interior Bergen Park in Seattle, Wash. The five trees, made of various materials such as clay, metal, fossils and glass, are attached to tall cedar posts that originally served as reference points for the first U.S. land surveys in 1851.

"Witness Trees" tells the story of Seattle's Scandinavian immigrants and is one of 380 permanent public-art installations the city of Seattle has commissioned since 1973 as part of its percent-for-arts ordinance. In an effort to create more opportunities for artists and revive Jackson, city officials introduced an arts initiative last week modeled after Seattle's program.

"Four months ago the mayor told us that he wants to see 1 percent of all eligible capital-improvement funds to go to public-arts improvement in Jackson," City Director of Human and Cultural Services Michael Raff said during a March 15 community meeting.

The city is still determining the exact dollar amount that would go to public arts through capital-improvement funds and which of those funds are eligible for arts projects, Raff said. The city typically allocates capital-improvement funds to long-term projects such as buildings and infrastructure. The funds come from several sources such as federal, local and state allocations, and some grants or federal earmarks may not be used for arts.

Raff said the city is seeking artists, community members and business owners to serve on a panel to plan projects. For the first project, Mayor Harvey Johnson Jr. wants the community to transform 340 traffic boxes at stoplights around the city into works of art. Raff said the initiative plans to provide compensation to artists for commissions in the future.

Johnson, however, has not yet introduced an arts ordinance to the City Council. Johnson's spokesman, Chris Mims, said the ordinance is a possibility, and the administration currently is looking into it.

City officials have met with consultants from Seattle's public-arts program, Raff said. In 1973, Seattle adopted an ordinance to allocate 1 percent of eligible capital-improvement project funds to commission, purchase, and install artworks in public settings such as parks, libraries, community centers and roadways. Seattle now has 380 permanent and 2,800 portable public installations including photographs and sculptures displayed on a rotating basis in public buildings throughout the city.

Additional Seattle projects include: a geometric sculpture framing the city's skyline; a skylight sundial in a city library; and 25-foot-high artwork panels around the construction fence of city's Civic Square, a public plaza under construction.

Lori Patrick, spokeswoman for the city of Seattle's Department of Arts and Cultural Affairs, said the public-arts ordinance has changed the face of Seattle over the years as more artists have migrated to the city.

"(Public art) inspired our work spaces, play spaces and really reflect our community," Patrick said. "Seattle is a cultural capital. We are known for our arts and culture, and our landscape, our urban landscape, really reflects that through art."

Last year, Seattle's public-art budget was $2.7 million, Seattle provides online applications and listings for its public-works project, and its art department plans specific projects each year that fall within budget.

Seattle's budget is significantly more than what Jackson likely will make available. For the current fiscal year, Jackson's capital-improvement fund totaled $24,902,879. The proposed 1 percent allocation to public arts would be less than $250,000; however, the entire fund would not be eligible for the arts.

"What we need is artists," Raff told the Jackson audience of approximately 30 people at the March 15 meeting. "I challenge you guys to come up with a plan to paint 340 traffic boxes. ... All of sudden, it's a quick way to say we are moving forward."

Greater Jackson Arts Council Community Outreach Coordinator Kimberly Jacobs said her group is on board with the plan.

"This is a catalyst for economic development," she said. "(Public art) has been a tool that brings people together and makes a great positive impact on the city."