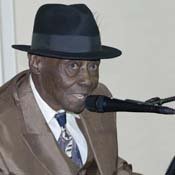 Mississippi native Pinetop Perkins, whose boogie-woogie blues piano playing backed up generations of blues legends before he took a turn in the solo spotlight, died Monday at his home in Austin, Texas. He was 97.

Born Joe Willie Perkins outside Belzoni in 1913, Perkins started playing guitar at house parties and dances while still a young child. After suffering a knife injury to his left arm in 1943, he was unable to play the guitar and switched his focus to the piano. He earned his enduring nickname for his renditions of the blues standard "Pinetop's Boogie Woogie."

After spending time in Helena, Ark., playing with slide guitarist Robert Nighthawk and Sonny Boy Williamson's King Biscuit Boys, Perkins moved to Chicago in the late 1950s and largely quit performing. In 1969, however, he dove into music again, joining Muddy Waters' band after the departure of its piano player, Otis Spann. Perkins performed with Waters during the guitarist's late-1970s comeback and contributed to his signature electric-blues sound.

Only in the late 1980s did Perkins begin recording as a solo artist, after spending the earlier part of the decade in the Legendary Blues Band, featuring other veterans of Waters' crew. When he did finally embark on a solo career, though, he did so with the energy of someone half his age. From 1992 on, he recorded 15 albums.

Last month, Perkins won a Lifetime Achievement award at the Mississippi Governor's Awards for Excellence in the Arts. He also received his third Grammy Award,last month for the album "Joined At The Hip," recorded with Willie "Big Eyes" Smith.

On Feb. 25, Perkins played his last show in Jackson, at Underground 119.