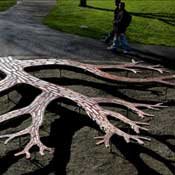 Seattle commissioned "Tree Bench" by Pratt Park, a public-art project through its percent-for-arts ordinance. The city of Jackson hopes to follow Seattle's lead.

The city of Jackson is seeking community partners to support a public-arts initiative that will provide opportunities for artists and youth to create art installations in the city.

During a March 15 community meeting for FIGMENT, a two-day art event planned for May, City Director of Human and Cultural Services Michael Raff announced the new initiative to community members at the Arts Center of Mississippi. Jackson is basing its initiative on models in cities like Seattle, Wash.

"Four months ago the mayor told us that he wants to see 1 percent of all eligible capital-improvement funds to go to public-arts improvement in Jackson," Raff said.

Raff said the city is still determining the exact dollar amount that would go to public arts received through capital improvement funds. The city typically allocates funds for capital improvements to long-term projects such as building and infrastructure.

The director said the city has met with consultants from Seattle's public-arts program. In 1973, Seattle became one of the first cities in the U.S. to adopt a percent-for-arts ordinance. The ordinance requires that 1 percent of eligible capital-improvement project funds are allocated to commission, purchase and install artworks in public settings such as parks, libraries, community centers and roadways. Seattle now has 350 permanent and 2,600 portable public installations.

Seattle's projects include: 25-foot high artwork panels around the construction fence of city's Civic Square, a public plaza under construction; a geometric sculpture framing the city's skyline; and a skylight sundial in a city library.

Raff said Jackson is seeking artists, community members and business owners to serve on a panel to plan projects. For the first project, the Mayor Harvey Johnson Jr. wants the community to transform 340 traffic boxes at stoplights around the city into works of art,. Raff said the initiative plans to provide compensation to artist for their work in the future.

"What we need is artists," Raff told the audience of approximately 30. "I challenge you guys to come up with a plan to paint 340 traffic boxes. ... All of sudden, it's a quick way to say we are moving forward."

Jackson Arts Council Community Outreach Coordinator Kimberly Jacobs said her organization is on board with the plan.

"This is a catalyst for economic development," she said. "(Public art) has been a tool that brings people together and makes a great positive impact on the city."

At this meeting, the Jackson Bike Advocates made a commitment to Raff that we would sign up to help make sure all 340 traffic boxes are painted. The JBA will be working with Figment, the Jackson Arts Council, the City of Jackson and others to use this traffic box project as an opportunity to merge public art with bicycle awareness.

So should we contact Raff if we want to help paint the traffic boxes?

I think following up with Kimberly Jacobs might be the best avenue. Raff came to us so we could find a way to make it happen; I doubt the city is ready to start organizing since they just announced. Kimberly, the JBA and Figment will follow up with Raff and the city to organize the effort. If you want to put your name on the artist list, I suggest emailing [email protected] and specifically say that you are interested in signing up for a traffic box.