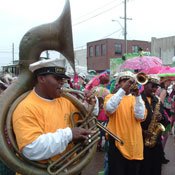 The Original Pinstripe Brass Band, based out of New Orleans, is a staple in the Mal's St. Paddy's Parade.

The Mal's St. Paddy's Parade comes with 29 years of history and traditions old and new, so a cheat sheet is helpful. Here are a few of the key players and things to know as you plan:

Malcolm White, now director of the Mississippi Arts Commission and co-owner of Hal & Mal's, started the parade 29 years ago and is the "Mal" in its name.

This year's theme is "Hey, Hey, the Blues is Alright."

Grand Marshals: Commissioners from the Mississippi Blues Commission, about five.

Who leads the way: The parade starts with the Pinstripe Brass Band and the O'Tux Society. The O'Tuxers are the White's marching krewe. Its members wear tuxes and hand out carnations in exchange for kisses.

Notable Krewes: Following the O'Tux Society is the Krewe of Kazoo. They're dressed in pink and carrying parasols. Behind them are the Green Ladies, the youngest of the marching krewes. A local brass band, the Mississippi Sounds, follows the Green Ladies.

Other krewes to look for: Vic Carmody's (and his ladies), the Rude Men (perennial winners), the Verde Do Krewe, the Krewe of Pressure, and the JFP's Blue Line Krewe (working with Figment).

Noteworthy prize: The Krewe of Pressure Train Wreck Award is named in honor of that krewe because one year on the way to the parade, they were, in fact, involved in a train wreck.

Speaking of prizes, the Bucketheads are the parade judges, stationed in front of the governor's mansion. You'll recognize them by their green robes and the buckets on their heads. They're sort of a secret society that one has to be invited to join. (We could tell you who some of the current Bucketheads are, but then we'd have to kill you.) Architect Sambo Mockbee was an original Buckethead.

Bob McFarland (former chairman of Jubilee!JAM) returns to Jackson each year from Seattle to head up the Children's Festival. This year's kids and pet parades will be on Lamar Street, with the rides set up on Pascagoula between Lamar and West streets.

Street Party Bands: After the parade, the Blues Boys Band plays outside Hal & Mal's on Commerce Street. They've played at the parade every year since the first one. The Pinstripe Band, which also leads the parade, plays next, followed by DJ Fast Eddie. Inside, Jesse Robinson plays from 6-9 p.m., and Fast Eddie takes over for the rest of the night.

The waitstaff: Hal & Mal's will serve a limited menu inside, with gratuity included, the motto being, "So our waiters can find their pot of gold at the end of the rainbow." The bartenders request that you bring your patience.

The Marching Malfunctions: Friday night before the parade is the inaugural Marching Malfunctions Second Line Stomp and Street Dance. Organized by John Hawkins, president of the Jackson Arts and Music Foundation, and coordinated with the O'Tux Society, Krewe of Kazoo and Green Ladies, anyone who wishes to participate can gather at the King Edward Hotel at 5 p.m. Friday. At 7 p.m., a brass band leads marchers up Capitol Street to Hal & Mal's, where a free outdoor concert will be underway featuring the Bailey Brothers, the Legendary House Rockers, Super Chikan and the Fighting Cocks and DJ Fast Eddie.