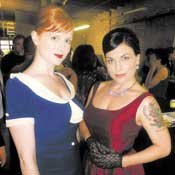 "Just dance." Say what you will about her, but Lady Gaga knows what she's talking about. Sometimes dancing is exactly what you need to do after a long week, and this past weekend it was what some fellow downtowners and I had on our minds. We also knew just where to go in the neighborhood Friday night to get the job done.

We decided to ease into things by first hitting up the bar at the King Edward Hotel (235 W. Capitol St.), where a couple of new faces—Jane Halbert Jones and Chad Dees—are behind the bar slinging drinks. In addition to their friendly faces, I'm a fan of the half-bottles of champagne that the bar has. And don't let it being a hotel bar fool you; it's not just for travelers. We ran into some other locals enjoying the patio, and after chatting with them for a bit, we were ready to head down the street to Dreamz JXN (426 W. Capitol St.).

Immediately upon arrival, my friend Maggie Middleton noticed the massage chairs set up on the stage. Turns out that Ilene Pullum of Sunshine Therapeutic Handz (601-953-2056) was giving free massages until a certain hour. As if that weren't enough, Dreamz was also providing free food. Maggie proclaimed the combination of free massages, food and old-school rap the most genius thing ever, and she eagerly headed to try out Ilene's skills. Eventually, we all did, and we are now big fans. Turns out, a chair massage is a great way to prime yourself for a fun night. (By the way, Ilene's business is mobile, and she'll bring her chair to you when you need her. Brilliant.)

After we got warmed up (and limbered up, thanks to Ilene), we were ready to do some serious dancing, so we headed to Freelons Bar & Groove (440 North Mill St.). Even though Maggie likened getting a drink to a competitive sport, it was the most fun any of us have had in quite a while. The DJ was awe-some, the crowd was good without being packed to a sardine-like capacity, and some more friends joined us there to dance the night away.

Since good things come in threes, we didn't stop at Freelons. To fully round out a downtown night, we headed around the block to F. Jones Corner (303 North Farish St.) because it's always a good place to end a late night. We even made some new friends while dancing to the blues.