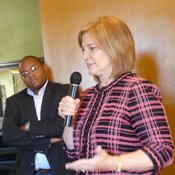 This is a corrected version of this story. Jackson Free Press reporter Lacey McLaughlin erroneously reported that Mayor Connie Moran helped secure $500 million in grants for Ocean Springs. The number should have read $50 million. We apologize for the error.

Ocean Springs Mayor Connie Moran believes that leading her hometown's recovery after Hurricane Katrina and spending 14 years in international economic development gives her an advantage over her opponents in the state treasurer's race.

Speaking at this morning's Friday Forum at Koinonia Coffee House, Moran said that her skills and experiences will enable her to not only oversee the states' finances, but to also spearhead initiates to provide Mississippians with jobs and a higher quality of life.

"If you're an elected official, it's not just about handing out contracts to your buddies and getting money. It's about taking care of the people, the elderly and giving opportunities to people," Moran, a Democrat, said.

Moran said her background in economic development, finance, grant writing and infrastructure upgrades qualify her for the job. Moran earned her master's and bachelor's degrees in finance and international commerce from Georgetown University in Washington, D.C. In the 1990s, Moran served as managing director for the Mississippi European Office in Frankfurt, Germany, recruiting new business and industry to the state for the Mississippi Development Authority. She also worked as an economist at the World Trade Organization in Geneva, Switzerland.

"I really had an opportunity to understand how international corporations see the United States of America and Mississippi," she said.

After giving birth to a special-needs daughter, Moran came back to the states and started a business-consulting firm, Moran Consultants. In 2005, she ran for mayor of Ocean Springs and was elected six weeks before Katrina hit the Gulf Coast, destroying much of her city.

After Katrina, Moran helped secure approximately $50 million in state and federal grants to repair the city's infrastructure. Ocean Springs also levied a 2-percent food and beverage tax to fund a new emergency operations center, courtroom, jail and a 40-acre sports complex. During her tenure, she has also pushed for green and renewable-resource development.

"I feel like I have had a good lesson in crisis management," she said. "We have done very well. If you have been to the Coast lately, Ocean Springs has rebounded faster than any community. But we weren't flooded downtown like a lot of our sister communities."

Moran touched on a host of issues this morning including eminent domain, the handling of state bonds and insurance rates. She said she believes that there are some significant developments, such as the Nissan plant in Canton, that require eminent domain to create jobs and enhance economic development, but not all developments.

"I believe you that you have to take a look at the impact of each project case by case, but I will have to say I would (see)--depending on size, impact and economic impact analysis--whether that makes sense."

Moran added that she does not support eminent domain for major roadways through small towns.

"You have to understand what that community wants to be," she said.

Moran called for more government transparency and promised to have a public database on state financial information as well as publish her schedule on her website if she is elected.

"Beforehand, you will know where I am going to be anytime and who I am going to talk to, because there is no time for secret meetings in the state of Mississippi." she said. "It's time for us to work together to create the goal, the vision, the jobs and a secure financial future for all people in our state."

Moran is the only Democrat running for state treasurer. Other candidates include Republicans Lynn Fitch, Lucien Smith and Lee Yancy.

If you're an elected official, it's not just about handing out contracts to your buddies and getting money..., Moran, a Democrat, said. At least she knows it's not JUST about that stuff. LOL What role does the state treasurer play in making sure the legislature doesn't change PERS?