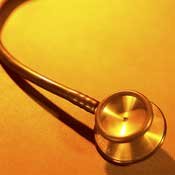 One of the best things a man can do for his family is to care for his health.

"Men don't like to go to the doctor. They think no news is good news," says Trudye Garraway, who has been on staff at the Baptist Health Systems Hederman Cancer Center for 24 years, counseling patients and families. "That's certainly not true with prostate cancer and with colorectal cancer. Those are two of the most curable cancers if they're caught early."

Women, if your husband, boyfriend or father won't go, nudge them. "Women sometimes have to be the ones to get the men to the screenings," Garraway says. "Wives, girlfriends and all, you can be the instigator."

Need to Know
From 2004-2008, the Mississippi Cancer Registry reported that 70,813 men died from some form of cancer. The most common are prostate, lung and colorectal cancer.

Prostrate Cancer
• An abnormal growth of cells in the prostate, a gland that is only found in men.
• Early prostate cancer usually has no symptoms; however, some men have experienced difficulty with urinating or a persistent pain in the back, hips or pelvis.
• Because most men are symptom free, it is imperative they get annual testing starting at age 50.
• African American men and men with a close relative diagnosed at a young age should begin annual screening at age 45.
• The earlier the cancer is found, the more options a patient has for treatment. The three most common treatments for prostate cancer are surgery, radiation therapy and hormone therapy.
Source: American Cancer Society

Colorectal Cancer
• Cancer of the colon or rectum is one of the most preventable cancers, because it develops from polyps (a mass of tissue or irregular mound-like legions) that can be removed before they become cancerous. It is equally as common in men and women.
• Those at risk include men and women over age 50; people who use tobacco, are obese or are sedentary; people with a personal or family history of inflammatory bowel disease or people with a family history of this type of cancer.
• This cancer has no symptoms in the early stages. As it progresses a person may experience rectal bleeding, blood in their stool, change in bowel habits, stomach discomfort, diarrhea, constipation, a feeling that the bowel did not empty completely, constant fatigue or vomiting.
• Treatment options include surgery, chemotherapy and radiation therapy.
Source: Baptist Cancer Services and WebMD

You Are What You Eat
Brittany Hammons Simmons is a clinical dietitian at the Baptist Health Systems Hederman Cancer Center. During Baptist's recent Cancer Survivors Day, Simmons offered these cancer prevention diet guidelines:
• Build muscle mass and become as lean as possible without becoming underweight.
• Exercise at least 30 minutes every day.
• Limit drinks and processed foods high in fat or sugar and those low in fiber.
• Limit salty foods and foods processed with salt including meats such as ham, bacon, salami, hot dogs and sausages. The goal is less than 2,400 milligrams of sodium per day, less if you're over 50.
• Limit alcoholic drinks to two for men and one for women per day.
• Eat a variety of vegetables, fruits, whole grains and legumes such as beans.
• Eat no more than 18 ounces (cooked weight) per week of red meat (beef, pork and lamb).
• Choose a balanced diet with a variety of foods instead of relying on supplements.

Resources
Cancer is the No. 2 killer in the state, according to the Mississippi State Department of Health. In 2005, Mississippi ranked fourth in cancer mortality in the United States. Each year, almost 15,000 new cases of cancer are diagnosed; more than 6,000 die from it.
• Hederman Cancer Center, 1225 N. State St., 601-968-1049.
• University of Mississippi Medical Center Cancer Institute, 350 W. Woodrow Wilson Drive, 1-888-815-2005.
• Mississippi's Comprehensive Cancer Control provides a website (http://www.healthyms.com/cancer) with resources and information about cancer, treatment decisions, home-health