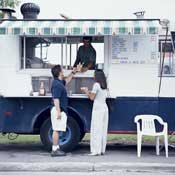 Last month, the council rules committee passed an ordinance allowing vendors to buy an annual $500 license from the city to sell food from a truck, so long as each permit only applies to one selling location, trucks are fully insured, and the distribution and preparation center meets strict guidelines on cleanliness. The council must approve the ordinance at an upcoming council meeting now that the ordinance survived a committee vote.

Ward 1 Councilman Quentin Whitwell altered the language of an earlier version of the ordinance so it now restricts vendors to pre-designated areas in the city, at least 150 feet away from any restaurant entrance. Competing restaurants can waive that requirement and allow a mobile vendor within that space if they so choose.

Some downtown restaurant owners are still leery of the new business the ordinance could herald, despite the changes.

"I'm still on the fence about it, but nervous," said business owner Steve Long, owner and manager of Steve's Downtown Deli and Bakery on South Congress Street, a business that caters largely to the downtown lunch crowd. "I don't like to say too much about the future, because you never know how it'll turn out, but it seems that it would mean more competition in a customer base that really isn't growing."

"We would love to refurbish Smith Park and turn it into something that people look forward to visiting," Scott said. "I think a food truck or two or three would do a lot to increase visitation. The ordinance allows for trucks to park on the road alongside the park."

Jackson resident Alake Chui said she feared the food trucks could represent a sanitation concern at a May 5 public hearing on the ordinance.

"My concern is that these people should be held accountable for cleaning up the environment. People might throw trash around, and then, when they leave, our communities are left worse off than before they came," Chui said.

Scott said it wouldn't take much work for vendors to keep their areas clean by providing convenient trash cans or recycle bins nearby and in the park.

"I can't speak for other truck owners, but I am a neat freak, and I won't let trash accumulate around our vehicle," he said. "I'm very OCD when it comes to neatness. I pick up after myself."

Whitwell said last month that he hoped the new ordinance would help cut down illegal food vending in the city.

"We have illegal catering going on and a number of people without permits who are selling food out of trailers and trucks," Whitwell said. "All of those people will now come under this ordinance and have to comply with these laws as well."

Food buyers can currently fill many of their produce needs at numerous street corners around the city. Growers from outside the city sometimes park pick-up trucks filled with vegetables, both raw and cooked, at street corners such as Ellis Avenue and Capitol Street. Other vendors set up barbecue pits at corners and sell various grilled meat and vegetable items.

Scott's partner and Jackson Free Press freelance writer Tom Ramsey said the city's current mobile-food permit is too temporary to base a business on: "Your license is only good for one day. You have to apply for your license every day."

One vendor selling watermelons in west Jackson said he had no knowledge of the city's current permit requirements, and expressed surprise that one was actually on the books.

As in other cities with a similar ordinance, food may not be prepared on the vehicles distributing it. Ramsey said he and his partner will work with a pre-existing restaurant, which will serve as a food storage and preparation center, before loading it on the truck.

The partnering restaurant, of course, must meet state health requirements.