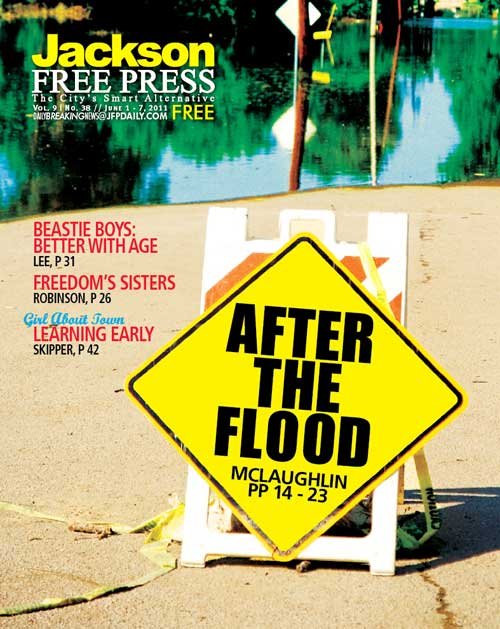 News that a flood was headed toward Vicksburg didn't come as a surprise to most residents. In late April, the Mississippi River and its tributaries began to overflow and reach record crests in Missouri. Kentucky, Illinois and Tennessee. What did surprise residents, however, was the historic crest that surged into neighborhoods. Photo by Aaron Phillips

Pat Wilson heard the warnings, but she didn't really think the Mississippi River would reach her trailer in the Kings neighborhood of north Vicksburg. But on May 9, as Wilson watched water rush toward her property line, she realized she had only a small window to save her important belongings.

The Mississippi River, flowing at a rate of 17 million gallons per second, won that battle. Wilson was only able to move a few pieces of furniture from her home. Fearing for her safety, she drove to higher ground with her 18-year-old son, Trevae. When she returned to her home the next day, she found her scrapbooks, keepsakes and photos underwater.

Wilson, who receives Social Security payments because she is disabled, left her Hutson Street mobile home that she had lived in since 1985, and took refuge at the Red Cross emergency shelter at Hawkins United Methodist Church nearby on Halls Ferry Road.

"I have family in town, but they just didn't have the space for me and my son," Wilson said.

News that a flood was headed toward Vicksburg didn't come as a surprise to most residents. In late April, the Mississippi River and its tributaries began to overflow and reach record crests in Missouri. Kentucky, Illinois and Tennessee. On May 6, parts of the Mississippi Delta began to flood, putting farmers' livelihoods at risk and leaving hundreds of people without homes.

What did surprise residents, however, was the historic crest that surged into neighborhoods. The area hadn't seen so much water since the flood of 1927. Then, the water flooded an area 50 miles wide and 100 miles long, and the water reached 56.3 feet above sea level in Vicksburg.

In addition to displacing residents, the flood has severe economic impacts. The flood has disrupted the transfer of materials such as steel and coal from Vicksburg's port, which is the 11th largest port in the nation. Barges are still allowed to move through the river but at a much slower speed, and many have had trouble reaching the port. The port's loading crane is also underwater. Gov. Haley Barbour predicted May 15 that the state would suffer $150 and $200 million in agriculture losses from the floods. The Mississippi Department of Employment Security reports that unemployment claims resulting from the floods total 2,696.

Even though the levees did not break or leak, this month's flood crested at 57.1 feet and left approximately 4,800 residents statewide without a home. Though residents had time to store their belongings, safeguard their homes and move to higher ground, several of them have never experienced a natural disaster of this magnitude.

The Waiting Game
On Sunday, May 22, American Red Cross volunteers sat idle at the entrance of the Hawkins' emergency shelter chatting. Maps and posters noting flood areas and resources for assistance are tacked to a large bulletin board behind the check-in desk. So far only eight people had checked in to the shelter as of May 22.

City of Vicksburg officials estimate that the flood has displaced 835 people, filled 214 homes, and closed 45 to 50 businesses, including two casinos, in the city, which has a total population of 29,000. The majority of victims are staying in hotels, with family and friends, or have found temporary rentals.

For residents like Wilson and her son, the Red Cross emergency shelter is a lifesaver. She didn't know where she would have gone if the shelter wasn't available.

Wilson sat among rows of empty cots in the church's community room. She was calm and relaxed, even though the shelter plans to close early next week, and she didn't know where she would go next. She said she has found support and camaraderie among the Red Cross volunteers and other storm victims.

"I can't help but be in good spirits," Wilson said. "It's like you are homeless, and at the same time, you are not homeless. I have so many friends and supporters here."

Two days earlier, Wilson and her son walked into the shelter to find TV reporters, friends and volunteers waiting for them with cake and balloons to celebrate Trevae's graduation from Warren Central High School. His graduation ceremony was scheduled for later that evening, and the shelter volunteers threw a surprise party. They gave Trevae a $250 scholarship to attend East Central Community College in Decatur this fall.

"I saw cameras and all these people, and I asked, 'Are you all here for us?'" Wilson said as she describes the event.

Hiccups and Setbacks
The next day, Wilson sounded uncertain over the phone. She was attempting to find an apartment. Because she lives on a fixed income, she needs assistance with a deposit and the first month's rent. Most of the applications she had filled out at various apartment complexes have determined that her income is too low to qualify her for an apartment. Wilson also does not have any flood insurance.

Wilson applied for rental assistance from United Way of West Central Mississippi before the federal government issued a disaster declaration for Warren County, making federal funds available for assistance. The nonprofit organization set up a $68,000 special fund to help flood victims with security deposits, rent, storage and up to $500 paid to families housing displaced residents.

After submitting an application, Wilson called the office twice and when she didn't get a call back, she visited the office located on South Street in Vicksburg on May 23.

"The receptionist told me that I was on the list, and that I just needed to be patient and wait," Wilson said.

Charlotta Ferguson, an accountant with the United Way of West Central Mississippi, said that her organization has struggled to keep up with the high volume of applications it received after the flood. While the United Way received an additional $14,000 from the public to provide rental assistance, she said that the majority of those funds has already been allocated. She suggested that residents like Wilson file an application with the Federal Emergency Management Agency for assistance, citing the disaster declaration that began May 12.

"She needs to make that registration because that's what's important," Ferguson said. "It's going to be on first-come-first-served basis. That declaration has been in place for a week now."

Wilson filed a claim with FEMA May 13. Ten days later, she received a letter from the federal agency denying her assistance. Wilson's trailer is located on her brother in-law's property, behind a house that he owns. Both Wilson and her brother-in law filed claims listing the same address, and FEMA specifies that only one member per household can file a claim for the same property.

"When FEMA saw the applications, they saw two names for one address," Wilson said. "They didn't realize that there are two homes on the same property."

Wilson is now in the process of disputing the claim, and said she's hopeful that she can get it resolved.

Disaster's Toll
On the muggy afternoon of May 24, Hutson Street resident Martha Haggard stood at the edge of murky brown floodwater that prevented her from reaching her trailer located several yards away.

She pointed at a water line on her pale yellow trailer under a window air-conditioning unit. The trailer is more than halfway submerged under water.

"That's where the water was," she said. "It's starting to go down, but it sure isn't doing it fast."

Haggard has also applied for assistance from FEMA. The federal agency's website said that 10 days is the expected amount of time to process claims.

"I'm going to need rental assistance for at least another month," she said. "It's going to be another good two to three weeks before anyone can get in there. It's rough. I've never been in a situation like this, and I'm 40 years old."

Later that evening, Haggard and Wilson sit among 250 flood victims during a meeting with federal and local officials about flood-recovery assistance at the Vicksburg City Auditorium.

Representatives include officials from the Mississippi Emergency Management Agency, FEMA, the state auditor's office, Entergy, the Army Corps of Engineers and the Mississippi Attorney General's office. The meeting provided a forum for residents to ask questions and address their concerns.

When MEMA spokesman Greg Flynn asked how many attendees were displaced, more than half in the audience raised a hand. Some residents said that they have never been through a natural disaster and were confused about the claims process and the difference between MEMA and FEMA. Other residents were trying to figure out why FEMA denied their claims or what specific amount of relief they can expect.

Wearing a white-collar shirt and blue jeans, Vicksburg Mayor Paul Winfield acted as a go-between for federal and state officials and his constituents. He admitted that he process can be confusing and intimidating, but encouraged residents to be cooperative and remain calm. It could be anywhere from three to five weeks before the water recedes and FEMA officials can inspect homes.

"It's going to require a lot of more patience (before the recovery process can begin)," he said. "Floods are a lot more destructive because of the nature of the water and how long it takes to go back in. That's something that everyone needs to understand in this process."

FEMA's website states that the agency provides funds for rental assistance, repairs, housing replacement and construction. Robin Smith, FEMA public information officer, said that every case is different and couldn't specify the exact amount residents might expect if they are approved. Throughout the state, FEMA had already allocated $600,000 in assistance, she said May 26.

"FEMA's want is to return things to a sanitary and safe condition," Smith said. "We as taxpayers would love for everything to go right back exactly the way it was before the flood happened, but the reality of it is, our taxes would be higher than they are now if we could magically do that for everyone who is affected."

On May 25, the Hawkins' emergency shelter, where the Wilsons were staying, closed. A long-term shelter at a Church of Christ located on the North Frontage Road opened. Wilson is staying there until she finds a more permanent solution. She said she hopes to move back to Hutson Street in the end.

Despite losing the majority of her keepsakes, Wilson said her faith has gotten her through this difficult time.

"Whatever takes place, I know that God will not leave me out there. I firmly believe that he will not put any more hardships on you than you can bear," Wilson said. "What I lost, it's paper. Paper will vanish, so I carry whatever it is in my heart. Can't no one take what's in your heart away from you."