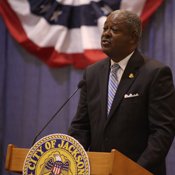 Jacksonians likely will not see hikes in their water or sewer bills this year now that the Jackson City Council voted to refinance the city's bond debt, Mayor Harvey Johnson Jr. said yesterday.

"This is not a guarantee that we won't have a rate increase, but they don't have to be as drastic as they would if we had not done the deal," Johnson said. "It would have put our infrastructures repairs on hold and potentially put us in violation of our own ordinance that requires us to have 120 percent coverage on our debt."

The restructuring plan the council passed yesterday excuses the city from original payments on its 2002, 2004 and 2005 water and sewer bonds for the next two years. The transaction will lower the city's interest rate from 5.05 percent to 4.30 percent, but extend the life of the 2004 and 2005 bonds two additional years to 2034. While it ultimately adds about $3.8 million in debt service after refinancing, it allows the city to realize short-term savings of $3.3 million this fiscal year and $3.3 million in fiscal year 2012.
The city's debt-service ratio requires it to maintain $1.20 in its water and sewer fund for every $1 it has in bond debt service. If the city violated the debt-service ratio, it could potentially hurt the city from obtaining bonds in the future.

"If the city develops a record of not fulfilling its debt service, and the rating agency takes a dim view, it could affect the city's credit rating," said Porter Bingham, a financial adviser for Malachi Group. "Then they would have to borrow at higher interest rates because of the lower credit rating. Saving money for short term, we will be able to cover that."

City council members spent more than an hour asking Bingham and bond attorney Steve Edds questions about potential risks the deal would have on the city's financial future. In the end, the council voted unanimously to approve the deal, with Ward 3 Councilman Kenneth Stokes absent.

Congress is currently debating whether or not to raise the U.S. debt ceiling by Aug. 2. Ward 7 Councilwoman Margaret Barrett-Simon expressed concerns about the impact that would have on the local municipalities' bonds.

"With the current situation in Washington, there is a lot we don't know about what the impact will be on the bond market as well as ratings," Barrett-Simon said.

The Wall Street Journal reported yesterday that Moody's put the country's credit on negative review last week, citing an increasing likelihood that Congress will not raise the debt limit by the deadline.

Bingham said that the city could back out of the deal before the bonds are sold, if the market changes drastically and takes a turn for the worst. He estimated a two- to three-week time period for the selling the bonds.

"The credit rating will be driven by what's taking place in the broader market if the U.S. credit rating is cut and subsequently it appears to trickle down to municipalities," Bingham said. "I think the timing is now and that's one good reason why I think we should do this."