‘We Can Stop This' | Jackson Free Press | Jackson, MS

‘We Can Stop This' 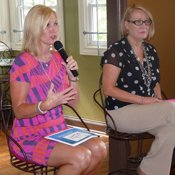 A few weeks ago, the Center for Violence Prevention received a phone call from a hospital employee in Yazoo City. The hospital was about to release a woman who had been stabbed by her husband and needed assistance.

The center, located in Pearl, worked with a local church to provide the woman with transportation. Community members donated clothes to her. A few days later, the woman took refuge at the center's shelter where she received support services. CVP Executive Director Sandy Middleton also followed up with the Yazoo County Sherriff's department to see if they had arrested the woman's husband.

"We need to finish this deal," Middleton told the officer.

Middleton joined Jackson Free Press Editor-in-Chief Donna Ladd to discuss the importance of domestic-violence prevention efforts in Mississippi and promote the Chick Ball, a fundraiser for the CVP at Hal & Mal's July 9.

Seven years ago, the JFP partnered with the CVP to raise money and awareness about the issue through the Chick Ball. Over the years, the event has gained support from the community and has helped fund a "Freedom Van" for the center, legal services for victims and seed money for the CVP's Batterer's Intervention Program.

"We started the Chick Ball in the first place as an all-around effort to help women find their voices and to end (domestic violence and) sexual assault," Ladd said.

Ladd added that the event has evolved into a celebration of women, and a forum for people to discuss domestic violence and become educated on the issue. To stop domestic violence, the CVP and the JFP are focusing on more prevention and education efforts. Proceeds from Saturday's event will help CVP expand its programs in rural counties.

"We have tried to turn from it being a conversation about helping the victims---which we all want to do," Ladd said. "... We wanted it to be systemic. That's something I've watched Sandy do and it's to say we cannot only help the victims: We can stop this, or at least stop most of it. We can stop the cycle."

Middleton started as volunteer at the center in 2004, when she heard it had to close its doors due to lack of funding. With the help of the JFP and other organizations working to end domestic violence , she has witnessed a change in the community's response.

"People are really starting to believe we can change things and that's so exciting to me," Middleton said. "I want to help the victims but more than that--I want to be out of a job. I want to have to find something else to do."

The 7th Annual JFP Chick Ball is from 6 p.m. to midnight, Saturday, July 9, in Hal and Mal's Red Room. Admission is $5. The event includes live entertainment, silent action and a live auction of the JFP's Men of Character. For more information, visit http://www.jfpchickball.com.

Also see: "Woman on a Mission"