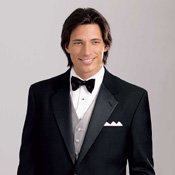 Groomsmen frequently match their vests to coordinate with bridesmaids' dresses.

Don Garforth is an expert when it comes to outfitting men for their weddings. The Pennsylvania native came to Jackson in 1978 and is the owner of two Tuxedo Junction stores in the Jackson area.

Garforth, who attended Furman University in South Carolina majoring in business and finance says, jokingly, "What a coinky-dink that I'd be in business. I just love retail; I just enjoy serving people."

Garforth started off in business with his dad in South Carolina. When his father retired he started looking for a new location to call home.

"We looked at a lot of different locations—Augusta, Ga.; El Paso, Texas; Jackson—and it just looked like a perfect size market for what we wanted to do. ... t was probably one of the best decisions we ever made. I have fallen in love with the people of Jackson," he says.

Outdoor wedding
Go for a lighter tuxedo, particularly in the heat of the summer. Garforth says that out of 10 renters, probably six or seven choose black tuxedos, with two or three choosing ivory. Brown or chocolate tuxedos have also been popular in the last two or three years.

Trendy/non-traditional wedding
Back in the old days, Garforth only had about five or six tuxedo styles. Today, he has a wide range of colors and fabrics. Colors include medium grays, dark grays, browns and blacks. Black is still number one, but people are in to matching the colors of the vests to coordinate with the bridesmaids dresses more than they are with the actual tuxedo. They come in looking for the vest colors before they even look at the tuxedo, which is a complete reversal of how it was 10 or 15 years ago.

Black tie/formal wedding
If it's an ultra-formal nighttime wedding, your only option is black, full-dress tails with the white pique shirt, vest, tie, white studs, cufflinks and white gloves. Thirty years ago, one out of 10 weddings Garforth did were at night. Now, it's probably four or five a year.

For an older groom
Most grooms will probably lean a little bit more toward a black tuxedo. It can be a regular sport-coat length or a little bit longer length, and one and two button coats are coming back.

Classic fit great on everyone
Garforth says because he's an "old timer," you can't really go wrong with just a basic black tuxedo with either a white or an ivory shirt, depending on what color the bride's dress is. The bride's dress and wedding should be the number one focal point, and if the gentleman wears a black tuxedo, her dress stands out in pictures.

Best general advice
Find a store like The Tuxedo Junction that actually stocks its tuxedos in the store. There are so many people, particularly for weddings, that come in from out of town, and the measurements they bring with them are a little bit off. When the tuxedo is in the store, 99.9 percent of all problems are handled right there.