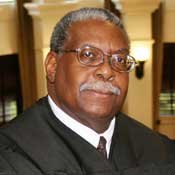 Leslie King, a veteran state Court of Appeals judge, will take departing Justice James Graves' place on the Mississippi Supreme Court. Gov. Haley Barbour announced yesterday that he would appoint King to serve the remainder of Graves' term, which expires in 2013. The U.S. Senate recently confirmed Graves' appointment to the U.S. Fifth Circuit Court of Appeals in New Orleans.

King is the fourth African American to serve on the state's Supreme Court. A native of Greenville, he received his law degree from Texas Southern University in 1973. He has worked in private practice, as a municipal court judge, and as a youth-court prosecutor and public defender. In 1979, King ran for and won a seat representing Greenville in the state House of Representatives. In 1994, he won a seat on the newly created state Court of Appeals.

"I thank Judge King for accepting this position on the state Supreme Court," Barbour said in a statement. "His extensive knowledge of Mississippi's legal system and his dedication to public service made him the top choice for this position."

King told the Jackson Free Press yesterday that he had no preconceived agenda for his service on the high court.

"I think it's premature to talk in terms of having an agenda," King said. '"Just going on court, what I intend to do is get my caseload, work very hard on it and ... and try to be as fair as I can and follow the law."

Asked for his opinion on the death penalty--given a recent string of exonerations and lawsuits challenging the state's capital-defense system--King said that he agreed with the Supreme Court's standard of "heightened scrutiny" for death-penalty cases.

"It's not something that one should enter into cavalierly, because if you make a mistake, you can't ask for a do-over," King said. "I think that you should look at it as carefully as possible and make your best judgment."