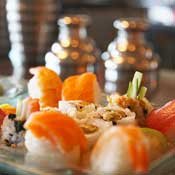 Fondren Sushi
The Fondren neighborhood will get a long-awaited sushi restaurant in April, developer Mike Peters says. Peters told the Jackson Free Press that Fatsumo Sushi, an American-style sushi restaurant in Gulfport, will open a location on Duling Avenue April 1. The Fondren location, between Fischer Galleries and the redeveloped Duling School, was originally set to house a different franchise, Fuze Sushi. A number of hiccups, including the death of the restaurant's original chef, delayed the opening indefinitely, however.

Fatsumo's owners have been able to take advantage of the construction work done by the earlier business, Peters said. Hanging light fixtures are visible through the restaurant's windows.

"It's really starting to take shape," Peters said. "They've finished the floors and the counters. They're moving quick now."

Fatsumo's chef, Scott Meinka, attended the Culinary Institute of America and worked at a variety of Japanese restaurants on the Gulf Coast before opening his own restaurant.

Meinka did not immediately return a request for comment.

Heir to the Ink Spot
Jason Thomas, former owner of downtown tattoo parlor The Ink Spot, has returned to Jackson after a brief stint in Little Rock, Ark., and has plans to open a new tattoo shop, Black Diamond, by March 10. Black Diamond is located next to Sam's Lounge, at 5015 Interstate 55 North.

Thomas says that he will be working with one other artist, Mallory Palmertree.

Lake Hico Dreams
Businessman Wydett Hawkins will lead a lunch discussion on the redevelopment possibilities for Lake Hico on Monday, Feb. 28, at the University Club downtown. Sponsored by 100 Black Men of Jackson, Jackson 2000, Parents for Public Schools and other groups, Hawkins' talk will focus on opening the lake for economic development. Reservations for the luncheon are required and cost $10. To reserve a place, call Olivia Lee at 601-366-8301 or e-mail [e-mail missing] by noon on Friday, Feb. 25.

Building Community
An upcoming public presentation targets people who yearn for a more complete community in their neighborhoods. On April 1, architects Charles Durrett and Katie McCamant will give a presentation on cohousing, an approach to intentionally building community in private housing. Durrett and McCamant are experts on cohousing, a movement that has its roots in Denmark but is reminiscent of small-town community ideals for previous decades. The movement appeals to people dissatisfied with urban, suburban or rural living arrangements in which neighbors are also strangers. Residents of a cohousing community can maintain their own individual homes while sharing common facilities or spaces.

Durrett and McCamant's public presentation, "Neighbors Building Neighborhoods: Maximizing a Southern Sense of Place," runs from 7 p.m. to 9 p.m. in Duling Hall, at 622 Duling Ave. A workshop for potential buyers and developers interested in cohousing follows, on April 2 and 3. Admission to the April 1 public presentation is $15 in advance, $20 at the door and $10 for college students. To reserve tickets or for more information, call Marie Owen at 601-362-7713.