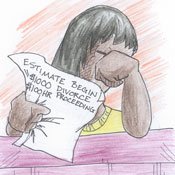 After her husband physically and mentally abused her for nearly a decade, Joy Jones* realized her situation was only going to get worse. She gathered up enough courage to seek a divorce and secretly obtained a lawyer, who encouraged her to close her and her spouse's joint checking account. Jones says earning the majority of the family's income gave her a financial advantage in being able to afford the proceedings.

When her husband found out, he was furious. She feared the worst as he left their house for several days and took her vehicle. Ninety days later, Jones filed for divorce citing irreconcilable differences, but because her husband had to consent, it took a year of pleading with him until he signed the divorce papers.

"It gave him more time to manipulate and control me," Jones says about why it took him so long to sign. "... Until he signed, he felt the liberty to come and go as he pleased."

Jones is one of many domestic-violence victims who find themselves stuck in an abusive marriage because of the state's divorce laws. Currently, the state offers 12 grounds for divorce, and those who are abused typically either cite irreconcilable differences or habitual cruel and inhumane treatment. Like Jones, relying on an abuser to consent to a divorce under irreconcilable differences gives the abuser an opportunity to exert further power and control over the relationship. And for a judge to grant a divorce for habitual cruel and inhumane treatment, a victim must testify in court, reliving those memories in front of her abuser in what generally turns into a he said/she said contest where the party with the best lawyer wins.

On Feb. 8, the Mississippi Senate passed a bill that seeks to give victims an additional ground for divorce: SB 2652 adds bona fide, complete separation without reconciliation, which would allow judges to grant a divorce if a couple has been separated for five years or more without any sexual contact. The additional ground would not require consent from both parties, but a judge could grant the divorce unless "the court finds the divorce not to be in the best interest of the children."

Bill sponsor Sen. Joey Fillingane, R-Sumrall, said while the bill does not contain specific language regarding domestic abuse or violence, the bill is meant to help victims along with anyone else seeking a divorce. He admitted that five years is a long time for victims to wait, but says the time period was necessary for the bill to pass.

"Almost every state has something akin to this. Most of them are shorter than five years--like 18 months or a year--but Mississippi is a very conservative state that's very pro-family and pro-marriage, so ours is going to be a lot longer than most states," Fillingane said. "But it would help those people who are being abused and feel the need that they have to leave the relationship to protect themselves."

The bill is currently in the House Judiciary A Committee awaiting a vote.

The Legislature has a few other bills addressing domestic violence. Last week, the Senate passed SB 2426, which would create a misdemeanor offense for anyone who obstructs another person from seeking emergency assistance. Sen. David Blount, D-Jackson, who authored the bill, said he introduced it on behalf of the attorney general's Domestic Violence Division to help prosecutors.

"This is a charge that could be used in connection with other charges (relating to domestic violence)," Blount said. "You would have to obstruct someone from obtaining emergency medical assistance."

The House passed a bill shortly before the Feb. 8 deadline for floor action that would give judges the option of requiring a person charged with domestic violence to wear a GPS device as a condition for bond. Jones said despite an amendment to House Bill 196, Rep. Sidney Bondurant, R-Grenada, requested that the bill be taken off the unofficial calendar of non-controversial bills on Feb 8. Bondurant was concerned that the bill would require judges to issue the GPS order for all domestic-violence offenders, Jones said. An amendment Jones added before the floor vote, however, changed the bill to state a court "may require" the GPS system instead of a court "shall require" it as a condition of bond.

The bill requires offenders to pay for the GPS equipment, but does not state what municipal entity would monitor the devices. Jones said that detail is still being worked out, and it would likely fall on local law enforcement.

Sandy Middleton, director for the Center for Violence Prevention, said the bill is a good step to protect women from domestic abusers, but judges will need to be educated about the GPS option if the bill passes.

"I think we have to trust our judges," Middleton said. "We have to trust and educate them to make the right decision. You can't put a cookie-cutter approach on any cause. It may be appropriate and it may not be. I think we are going to have to have confidence in our judges to put it in place when it needs to be in place."

The House also passed a HB 1340 Feb. 7 that would make attempted murder a homicide offense, and those convicted would face at least 20 years in prison.

*Joy Jones is not the real name of the victim in this story; her name has been changed to protect her identity.