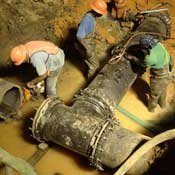 The prospect of a state-mandated commission still stands between Jackson and millions needed for infrastructure.

City leaders have only one major request this legislative session, but that doesn't mean they'll get it. Jackson lawmakers are pushing to revise a 2009 sales-tax bill that offered a stream of funding for public safety and improvements to the city's flagging road, water and sewer infrastructure. The bill came with a requirement that the city establish a commission--stocked with non-city appointees--to oversee spending of the money, a mandate that Mayor Harvey Johnson Jr. rejected as too onerous.

The bill called for a nine-member commission: one appointee each from the governor and lieutenant governor, three mayoral appointees and another four appointees the mayor selects from a list of nominees provided by "the local chamber of commerce."

Johnson never offered the tax proposal up for the public referendum necessary to approve it.

"Mayor Johnson has always maintained that the commission is not palatable," city spokesman Chris Mims said. "People elect the mayor and (other) elected officials to oversee city funding. We don't need another body to tell us how to spend the money."

This year, Jackson Sen. John Horhn introduced a bill that would delete the commission requirement, dedicate more of the sales-tax revenue to infrastructure, and extend the tax's lifespan from five years to 20 years. SB 2839 changed substantially in the Senate Finance Committee, however, where committee members reinserted the oversight provision.

The Finance Committee also increased the share of tax revenue going to infrastructure from 79 percent--with the remainder for public safety--to 99 percent.

Horhn said that oversight by the commission was a sticking point in getting his bill out of committee.

"I gathered from some informal conversations with my colleagues that that was a deal breaker," Horhn said. "The more conservative, outside-of-Jackson, rural legislators who are in the Senate tend to favor a commission."

The bill could still change form on the Senate floor or, if passed, in the House of Representatives. Mims said it was too early to say whether the mayor would support the sales-tax bill in its current incarnation.

"First of all, I think we should the let the legislative process carry on," Mims said. "Number two, a commission is really moot until the voters of Jackson decide whether or not they want to be taxed in the first place."

An extended expiration date for the sales tax would give the city the assurance of a long-term source of revenue, as much as $15 million annually, Mims estimates. The city could use that money to float bonds to pay for infrastructure work. Those improvements will carry "a hefty price tag," Mims said, with estimates of required upgrades on the sewer system alone around $76 million.

The cost of sewer improvements could go much higher, however, when the city enters a consent decree with the federal Environmental Protection Agency this year.

Mims said that the city is "negotiating" with EPA about the state of its sewer and wastewater treatment system and will likely have a federally mandated plan of action "later this year."

The city's main legislative request isn't the only item to get warped in the Finance Committee. Another proposal from Horhn also appears headed for a vote by the full Senate, but in a form drastically different from its original. As Horhn introduced it, SB 2950 would have allowed the state to transmit blighted properties in Jackson from its control directly to the Jackson Redevelopment Authority, bypassing city government.

Currently, when an owner stops paying taxes on property in Jackson, the Hinds County Tax Collector's office puts the property up for auction. If no one buys the property, however, ownership reverts to the state. The state typically cannot grant property directly to an urban renewal agency like JRA; it must offer the land to local county or city government first, which must accept the land and then vote separately to hand it over to an economic development agency.

JRA Executive Director Jason Brookins said that the process of placing a property transfer on the City Council agenda and then obtaining council approval can take months. Brookins said that he did not know of any specific state-owned properties that JRA was interested in acquiring but that the authority would welcome the change.

"It would reduce steps in the process (for) any redevelopment authority whose goal is to redevelop slum or blighted areas," Brookins said. "It makes it easier to get that property back in the hands of taxpayers."

Nevertheless, the version of SB 2950 that the Finance Committee approved last week lacks any of the provisions about state property. Instead, it purports to offer Jackson city government the option of selling blighted property to JRA, something the city can already do. Horhn said that objections from Finance Committee Chairman Sen. Dean Kirby, R-Pearl, doomed the original language in the Senate, but the House could still restore the bill's original intent.

"The chairman said that he just felt more comfortable not involving the state in it," Horhn said. "I don't think that he has a real understanding of what we're trying to do. Rather than argue with that, I made the decision to not oppose the chairman at this point and see if we can work on it in the House."

As a resident of Jackson I know it will be hard to get 60% of the voters to approve a 1% sales tax increase in these hard economic times. I'm not sure I would vote for it and my economic situation is better than the average Jacksonian. But any tax increase that comes before the voters that has a commission in it is DOA. It would have no chance of pasing. Someone wrote a letter to the CL advocating that the legislature make a one time exception and award Jackson a license to operate a casino in the city limits with the proceed going to fix the water sewer/problem. I strongly support this idea as it is a way to achieve the needed infrastructre upgrades with the least discomfort to the average citizen. I wonder why we have not heard this idea being advanced in the Legislature?

First of all, why does Jackson have to have a commission to tell us how to spend our money? I know other cities have had to lobby the legislature to raise taxes, but would they be required to have a commission? And the idea of a casino in Jackson won't fly. Heck, you see how Barbour howled at a casino being build on Native American property in Jones County (though he had no say-so in the matter). Really, anything to benefit Jackson is a no-no for the legislature.

I absolutely disagree with the proposed makeup of the commission. However, it does give pause to think that if we are going to encourage non-residents to shop in Jackson and be taxed at a higher rate than if they shopped at home, perhaps some form of representation is due, albeit not with the same voice parity as city appointees.

Chaffeur... I don't buy that reasoning. Sales taxes are a choice. I chose to shop in Flowood, I chose to shop in Clinton, but I have no representation there and nor should I. And I believe the push has been to get Jacksonians to stay home and shop, which I do 75% of the time. However, by choice, I do like shopping at Dogwood.