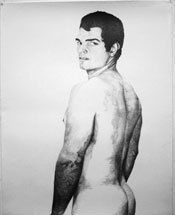 Tony B gazes at the viewer with intent and mystery. His bare body is turned at a sideways stance as if he is trying to conceal a secret. Mary B poises her arms in a ballerina pose over her head, gracefully revealing her bare chest with her head held high.

"It Is What It Is," a series of life-size graphite and charcoal nude portrait drawings by Millsaps College student Mark Herndon, provide an intimate glimpse into the subject's personalities and individuality. The drawings explore themes of vulnerability, power and honesty—qualities a person's clothing often hide or distract.

Herndon says nudity places a person in their most real form. "I was toying around with the idea of doing portraits and thought it was the best way to do something really honest, and to expose their emotions, their thoughts," Herndon says. "I figured if they were nude it removed any type of persona or façade."

The 20-year-old Texas native worked on the 15 portraits from photographs he took of each subject. He says he chose the photographs to draw based on the pose and expression that he thought best represented his subject. Those subjects are current Millsaps students and alumni—adding another intimate layer to the exhibit. On the small liberal-arts campus, with a tight-knit community of professors and students, such an exposé demonstrates risk taking, as students will likely recognize their peers.

"Someone might take this as ‘she's in my math class and she's naked in the gallery,'" Herndon says. "But other people have told me that (because) they know these people, it makes them appreciate the artwork more, seeing them portrayed in this way."

Herndon's portraits don't show the subjects in a sexual context, but rather in a rare and personal form—a side few people share with the world. His work makes you realize that there is often more to people than first meets the eye.