Group Forms to Save Fondren Strip 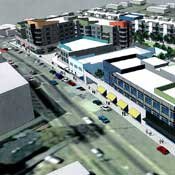 A group of Fondren residents has formed "Save Our Strip," to try and save a strip of businesses on North State Street that the proposed development "Whitney Place" would replace.

An online petition asking developer David Watkins to preserve a 1938 strip of Fondren businesses on North State Street has gained the support of 189 people. Watkins proposes to tear down the strip and replace it with the Whitney Place Development.

Arin Clark Adkins, one of the founders of "Save Our Strip," a group of Fondren residents who are trying to preserve the buildings, said the petition is a statement to support preserving the historical buildings, which were used as a set in the filming of "The Help."

While Watkins does not currently own all the buildings on the strip, including Mimi's Family and Friends, Rankin Interiors, S&E Lock and Key and others on the southern end, the $80 million development would replace the existing buildings on State Street from Mitchell Avenue to Hartsfield Street with eight acres of retail shops, apartments, a boutique hotel, and green space for concerts and festivals. Watkins said in October that the buildings had significant structural damage, and the cost of preserving the buildings wasn't an economically viable option. He added that construction could begin as early as fall 2011. A Hinds County property search shows that Whitney Place LLC, which lists Watkins as an officer, owns the strip of businesses beginning at 3009 N. State St. where Antique Market is located. Hinds County lists J. William and G. Kimberly Cooper as the owners of the southern end of the strip at 3001 N. State Street.

Adkins said she needs to see additional data to support the extent of the buildings' structural damage, and she isn't convinced that they have to be torn down. She compared the strip to the King Edward Hotel, which Watkins helped revitalize even though critics claimed the building was beyond repair.

"The King Edward was brought back from the brink. These buildings are occupied, and they are vital. The tenants have real businesses, and (the buildings) could certainly be renovated," she said. "I'm not saying that there wouldn't be cost involved, but because of the history and the nostalgia that they bring to Fondren, we feel that even if they were terrible shape, we would ask that they be preserved."

Adkins, an attorney whose law office in located in the Fondren Corner building, said she received feedback from several Fondren residents after she wrote a December opinion column for the Jackson Free Press, encouraging a community conversation about preserving the buildings. Save Our Strip formed a petition on signaturesipetition.com on Jan. 22 after determining that other residents were in favor of preserving the strip.

"We, under no circumstances, want the Fondren Strip demolished," the petition states. "If the development is to occur in the area, we want the current buildings, in their natural state, incorporated into the plans. If development is to occur, we believe the scale of the proposed development is too large for that area. We do not want such a density level there, and feel it would overwhelm our community and ruin the unique and livable village of Fondren."

Adkins added that she is not opposed to the entire development, and wants to see Fondren have more economic opportunities. She does, however, hope that Watkins will consider the concerns of Fondren residents before moving forward.

"We are in communication with Mr. Watkins and hope that we can reach middle ground," Adkins said, adding that currently there are no scheduled public meetings regarding the development.

"We are trying to offer a community voice; that is the bottom line," Adkins said.

Jackson native Frank Ezelle, 59, has lived in Fondren since 1978, and, while he has nostalgia for the strip where he would go to the Pix Capri for movies when he was a child, he is still undecided about the development and has not signed the petition. Ezelle, who documents Fondren events on his blog "Photos From Fondren," said he wants to see more retail in the neighborhood and understands that the buildings need repair.

"I would like to see what they are getting ready to do. I don't want it to overpower Fondren, so I'm kind of in the middle," he said. "I'm not 100 percent attached to those buildings, but I'm attached to the atmosphere in Fondren."

In October, Watkins said he did not have plans to purchase the Pix Capri and would build his development around the old theater. Watkins did not return calls for this story.

No way that strip is worth renovating. Let Watkins demolish it. Wouldn't mind taking down that hideous Kolb cleaners building too. I can't imagine the proposed Watkins development being any more "dense" than the BankPlus and Fondren Corner buildings, both of which are unique architecturally and bring a nice combination of commercial and residential to the Fondren area.

If you really care to see this strip mall saved, put your money where your mouth is and form a group of investors that will take over the property from Watkins. All Watkins is trying to do is make sure he doesn't lose money on the property. The King Edward was able to get a lot of help through outside funding due to its historical significance, and I seriously doubt this strip mall will have that advantage. It monetarily just doesn't make sense to save the strip if Watkins loses money on the deal. You'd feel the same way if it was your cash.

I live in Fondren, and I was really looking forward to Whitney Place. I think that David Watkins will be sensitive to the history and the other surrounding buildings in developing the project. Why would he want to build something that would be a sore thumb in the area? He's trying to make money, so I believe he'll create something that goes well with the area and brings more business and residents.

Community members have the right to expresss their their ideas about their built environment and to try to shape it in the most agreeable way possible. If you disagree, you should buy a ticket to someplace more autocratic. Just because you buy the car doesn't mean you can run people over with it.

I agree with gwilly. Residents have every right to speak up about major changes in their neighborhood that would change it in a major way. Please don't try to silence people. And I rather doubt it will work anyway.

Of course, you have a right to speak in favor of the project. But above you were tarring the people who oppose it in an extremely belittling way rather than speaking in favor of it. Apply the same standard you just expressed to yourself, and I'm sure all will be well. There is no reason for personal attacks going either direction on this issue.

I supposed I was "reacting" to the suggestion that only someone who owns the buildings should have anything to say about the development. This sentiment was expressed by two people, and it is a sentiment that is, in effect, telling people to shut up. What makes this rather funny is that, so far, no one in this thread has actually criticized the development. All the criticism has been directed the critics of the development. I defend anybody's right to speak in support the development, but I do not support efforts to quiet the opposition. The developers and their supporters and investors should be open to hearing the concerns of the people who live, work and shop in Fondren. If not, they will just be bullies, not the visionaries they may aspire to be.