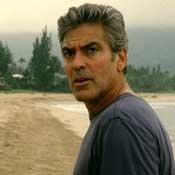 "The Descendants" is an awkward, funny story of a family and its melancholy.

"The Descendants" bubbles to the top of critic lists and Golden Globe nominations. The film goes against the current of behemoth blockbusters; it defies the prevailing philosophy of franchising prior successes, recycling and repackaging old stories under new names. As a one-of-a-kind personal journey, "The Descendants" will have no franchising opportunities. Also absent from this film are guns, explosions and car chases. And although it does have the megastar of the year (that would be George Clooney for those who have not seen "Ides of March" or read his list of SAG and Golden Globe nominations), this movie didn't require a budget larger than the gross national product of Micronesia to be made.

What "The Descendants" does have that the typical Hollywood film does not is something more precious and intangible than movie-making-by-the-numbers. This picture has a gifted director with a feeling for the beauty of comedy and a marvelous ensemble of actors who seamlessly blend together until it is no longer possible to tell art from life. Directed by Alexander Payne ("Sideways") and starring Clooney, Shailene Woodley, Amara Miller and Nick Krause, "The Descendants" makes the ordinary melodrama of life a poignant and comic gift. With all the gimmickry exploding on theater screens, this film is a treasure of purity and simplicity.

Set in a Hawaiian paradise alternating between Oahu and Kauai, shoes are left at the door and faded flower shirts are de rigueur. The film's protagonist, Matthew King (Clooney), is a rich man with a sterile life. He loves his family, but has the emotional acumen of a jellyfish. His youngest daughter Scottie (Miller) probes him with pestering "why" questions such as, "Why is a jellyfish called a jellyfish when it is not made of jelly and is not a fish?"

King defers the parenting of Scottie and his wayward 17-year-old daughter Alex (Woodley) to his wife, Elizabeth (Patricia Hastie). He refers to himself as the "back-up parent." He prefers his solo law practice, working day and night scraping together a middle-class existence, to enjoying his sizeable inheritance on luxury pursuits with his family. Despite his shabby shirts and shoes, King is a serious man. He determines the fate of a family trust consisting of 25,000 pristine acres in Kauai. He's responsible for protecting the King legacy, but is utterly clueless to the slow disintegration of his immediate family.

Then a cold splash of the unexpected snaps King from his inertia and dull routine. It's that wake-up moment, the big gotcha, where King realizes the flimsy foundation of his sand-castle life has collapsed. His wife, the mother of his children and the center of the family unit, suffers a boating accident, rendering her brain dead. Doctors must pull the plug per her final, written directives. Her parents must be told and friends allowed to say their goodbyes. And then the tidal wave hits: King learns from his oldest daughter that Elizabeth was having an affair at the time of the accident. He was too busy to notice the betrayal.

This film, adapted for the screen from Kaui Hart Hemmings' novel, lets the weaknesses and follies that defeat King appear right on the surface. Payne's subtle direction orchestrates the angst and building pressure King faces in his personal life and with the land deal he is working on. We see the frustration, but also feel the love that binds King and his daughters, his in-laws, extended family and friends. Throughout the film are nuanced modulations of familiarity and indifference, sparked by frank bursts of outrage, such as when King screams at his comatose wife in the hospital. The absurdity is awkward, funny and melancholy at the same time. Through the trivial and momentous moments in the King household, we experience a delicate, comic elegy on family and an ode to its rebirth.