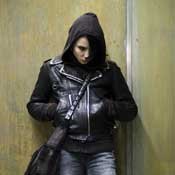 Defining when the holiday season begins gets more complicated every year. A growing number of retailers pull out the Christmas garlands and ornamentation around Halloween. Black Friday and cyberspace Monday overshadow the annual homage to pilgrims and turkey feasts. Not wanting to be left behind, movie distributors have grabbed onto the premature rush of holiday consumerism.

"Arthur's Christmas," "The Muppets" and "Hugo" (a triumvirate of family fare) opened before Thanksgiving, and may not be around in December given the flood of new product. "New Year's Eve," a haberdashery of glitteratzi and schmaltz, opened weeks before the ball will drop.

What I have gleaned from intense analysis over a cup of cappuccino is that anything remotely holiday-like hits the movie theaters long before the actual holiday. What does come out during the Christmas, Hanukkah and Kwanzaa season is big-budget escapism. So if you have had your fill of "It's A Wonderful Life," "White Christmas" and other classics, think about a family escape to the movie theater where the holiday playlist guarantees adventure, intrigue and some last-minute Oscar contenders.

'Sherlock Holmes: A Game of Shadows'
Robert Downey Jr. And Jude Law go for a second round as the famous Holmes-Watson detective team. Swaddled in Victorian clothes, drizzled in droll humor and mirroring the successful formula of the first movie, Holmes and his sidekick battle wits with the villainous Moriarty (Jared Harris), who embodies in one persona the evil nature of Grinch, Scrooge and greedy Wall Street power grabbers. Holmes and Watson bring out an arsenal of guns, gadgets and explosives for this bromance adventure.

'Mission Impossible: Ghost Protocol'
When you think it couldn't get any bigger and better, along comes movie four in the "Mission Impossible" franchise. Ethan Hunt (Tom Cruise) is invincible in this extravagant picture involving an ever-changing mission requiring high-tech suction cups to scale the world's tallest building, fantastical ops to infiltrate the Kremlin and implosive strategies to abort a nuclear warhead. It's all part of the job for Hunt and his team, whose actions pulsate to a riveting score. Don't expect the U.S. government to cover their backs if they are caught. Ghost protocols apply.

'Alvin and the Chipmunks: Chipwrecked'
Dave's (Jason Lee) parental shriek defines the entire 50 years of squirrelly chipmunks who speak in helium squeals. In this third motion picture, Alvin and his brothers carry on as world-famous rock stars embarking on a luxury cruise. Misbehavior and other flights of incredible fancy lead to the 'munks finding themselves marooned on an island. The shrill, pop music will appeal to the under pre-tween crowd.

'The Girl With the Dragon Tattoo'
David Fincher ("Se7en," "Zodiac") directs the English-language version of Steig Larsson's bestselling novel. Ardent Larsson fans worried about a Hollywood version when there was already an outstanding Swedish film can relax. Fincher delivers a suspenseful, beautifully acted and mesmerizing film. The girl with the auspicious dragon tattoo, as well as a slew of body piercings, is Lisbeth Salander (Rooney Mara). She redefines the concept of hero, much like Clint Eastwood has done for westerns. This antisocial, highly sexual criminal and hacker heroine helps investigative journalist Mikael Blomvist (Daniel Craig) solve a mind-blowing serial crime.

'We Bought a Zoo'
Based on a true story, Cameron Crowe ("Jerry Maguire," "Almost Famous") directs this feel-good movie about a single dad (Matt Damon) who changes his family's life by buying a dilapidated zoo. The film begins six months after Benjamin's wife (Stephanie Szosak) has died from a brain tumor. When his son Dylan (Colin Ford) is expelled from school, Benjamin quits his job at a Los Angeles newspaper and, against the advice of his older brother (Thomas Haden Church), buys a sorry-looking zoo that has long been closed to the public.

With 200 animals to feed, a motley group of unpaid workers and a zookeeper (Scarlett Johansson), Benjamin and his children have a long, hard road to making things work.

'War Horse'
The commercials for "War Horse" promise something regal, beautiful and sustaining. Directed by Steven Spielberg, this movie tells a tale about a horse named Joey whose owner sells him to the English cavalry for service in WWI. Then Albert (Jeremy Irvine), the kid who loves and trained Joey, follows into battle.

Other notable films to see include Oscar contender "The Descendants," which opened earlier this month and stars George Clooney; "The Iron Lady," starring Meryl Streep as the formidable Margaret Thatcher; and "Extremely Loud & Incredibly Close," which tells the story of a boy (Thomas Horn) searching to answer a hidden message from his father (Tom Hanks) who died in the Sept. 11 attacks on the World Trade Center.