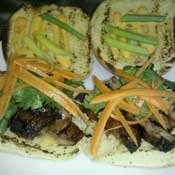 All that hoopla back at the first of January was just practice. The real new year starts now with the beginning of football season, when everyone is undefeated and hope springs eternal. What better time to make some resolutions?

I resolve to not let the victory or defeat of my beloved Saints dictate my mood for more than 36 hours. I resolve to not "shush" my wife and children when they come to me during the game with minute problems like "the house is on fire" or "Zak cut his thumb off—again."

Most importantly, I resolve to be more creative when it comes to football snacking. No more one-pound bag of Doritos. No more delivery pizza. No more whatever it is that I ate and don't remember.

This year, when my friends come over to share my black-and-gold-wrapped joy or anguish, we'll be well fed.

One easy way to be creative but not too stuffy is to make gourmet sliders. And with a little help from your local grocer, you can even do this with minimal effort. Essentially anything delicious between two little buns can be called a slider. Leftover fried chicken and mashed potatoes? Colonel's Sliders. Leftover spaghetti with meatballs? Sliders Italiano. Half a rack of ribs (pulled off the bones) from Lumpkin's BBQ with some slaw and barbecue sauce? Juke Joint Sliders.

See how easy that is?

Let's say you have a little time, but not too much, and want to do something more than leftovers. Swing by McDade's and have them steam some shrimp for you. Take them home, and get them good and cold. Make a pot of boiled new potatoes and chill them, too. On the slider buns, put some cocktail sauce, a couple of peeled, steamed shrimp and a couple slices of boiled new potatoes. Voila! Biloxi Shrimp-Boil Sliders.

Are you catching my drift of how this works? Newton would have expressed it thusly: [(GF/L)+B(t)+C=Y]>1#D. Translated, that's great food or leftovers plus tiny buns plus condiment equals yum greater than a pound of Doritos.

Now, use your imagination and come up with one on your own. Did you think of rotisserie chicken plus potato salad? I thought you did. Did you call it Picnic Sliders? Nice work. Keep it going, and I'll give you a recipe for one that you can make from scratch when you really want to impress your guests.

And oh yeah. I almost forgot:

Thinly julienne carrots and soak in cold water. In a mixing bowl, combine vinegar, honey, juice from limes, and a half-tablespoon Sriracha sauce. Drain carrots and add to vinegar marinade, then place in refrigerator for at least one hour.

Season pork chops with five-spice powder, salt and pepper, and rub liberally with hoisin. Refrigerate for 20 minutes before cooking.

On a hot grill or grill pan, cook pork chops for two minutes on each side. Remove and allow to rest while assembling sliders.

Toast slider buns on the grill. Spread mayonnaise mixture on each bun. Cut cooked pork chops in half and place one piece on each bun, topped with the chopped cilantro and marinated carrots.

These things rarely make it to a plate. They just get gobbled up in front of the TV while the Saints march on to victory.