Flynn's Games Of The Week 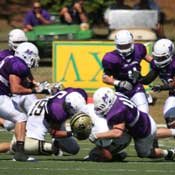 Each week of the college football season has at least one must-see showdown. There are in-state rivalries, big conference games and, of course, the annual homecoming games. Here are the college games I would pay to see.

Week 1: Sept. 3
Main event: Millsaps at Mississippi College: any game called the "Backyard Brawl" between two schools mere miles away is a must see.
Honorable mentions: BYU at Mississippi: A big out-of-conference test for the Rebels.

Louisiana Tech at USM: Only team the "Big 3" all play in common.

Grambling State at Alcorn State: A SWAC battle to begin the year for two teams with title hopes.

Week 2: Sept. 10
Main event: Mississippi College at Belhaven: Why can't this game be "Backyard Brawl II"? Better yet, why can't the three small Jackson area colleges—MC, Millsaps and Belhaven—play for a trophy each season?

Week 3: Sept. 15-17
Main event: LSU at MSU: Bulldogs have a chance to show the country they are for real on ESPN's Thursday Night Football.
Honorable mention: Mississippi Valley State at Alcorn State: Great way to spend a Saturday, watching an in-state SWAC battle.

Week 4: Sept. 24
Main event: Louisiana Tech at MSU: Bulldogs should know what they are up against after watching tape of LA Tech and USM.

Week 5: Sept. 29-Oct. 1
Main event: Texas Southern at Jackson State Sept. 29: The Tigers showcase their talent on ESPN(U). We will know by now if JSU's season is up or down.
Main event 2: Georgia at Ole Miss Oct. 1: The other SEC Bulldogs are supposed to be better this season.

Week 6: Oct. 8
Main event: Arkansas-Pine Bluff at JSU: It is homecoming at JSU. Tiger fans get the homecoming halftime show.

JSU at MVSU: The Delta Devils host the Tigers for a conference victory and in-state bragging rights.

SMU at USM: Golden Eagles host the Mustangs for homecoming.

Union College at Belhaven: Blazers have homecoming this weekend as well.

Howard Payne at MC: Nearly the whole state has scheduled homecoming the same week, including the Choctaws.

Week 9: Oct. 29
Main event: Texas Southern at MVSU: Texas Southern makes their second trip to Mississippi. This time it is to play the Delta Devils for homecoming.
Honorable mention: Centre College at Millsaps: Majors get a shot at a homecoming win.

Tennessee-Martin at MSU: Bulldogs should take care of business and enjoy the homecoming festivities.

Week 11: Nov. 12
Main event: Alabama at MSU: Bulldogs get their shot at the Crimson Tide and a possible West title for either team.
Honorable mention: Louisiana Tech at UM; LA Tech's Mississippi journey comes to an end on their third trip and first trip as the homecoming opponent for the Black Bears.

Week 12: Nov. 19
Main event: ASU at JSU: Capital City Classic, Battle of the Bands, a major SWAC/in-state rivalry. This game is must see every year.
Honorable mention: LSU at UM: Tigers take on the Rebel Black Bears. Will UM still be playing for anything at this point?

Week 13: Nov. 22
Main event: UM at MSU: The Bulldogs have owned the Rebel Black Bears for two years. Will the Egg Bowl stay in Starkville? No matter which team wins, this is can't-miss football.
Honorable mention: Memphis at USM Nov. 26: A rivalry between states and conference foes. Tiger and Golden Eagle fans wait for this game every season.