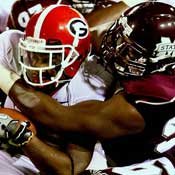 At the end of every football season since 1996, the Mississippi Sports Hall of Fame and Museum has awarded the Conerly Trophy to the best football player at a four-year university or college. Five quarterbacks, six running backs and four defensive players (linebackers or defensive line) have won the trophy so far.

Ole Miss has the most Conerly winners with five, followed by Mississippi State with four, Southern Miss with three, Delta State with two and Millsaps College with one. No wide receivers or defensive backs have won.

Using past award winners as a guideline, here's a list of players to watch this year by school.

Chris Relf
Relf broke onto the scene as a junior in the 2009 Egg Bowl and gave Bulldogs fans their first glimpse at what 2010 would look like. Relf had a productive season last year, throwing for 1,789 yards, rushing for 713 yards, with 18 passing or rushing touchdowns. As Relf goes so does MSU in 2010.

Vick Ballard
The only thing you have to know about Ballard is the number 20. Ballard finished 2010 with 20 touchdowns (tied for sixth in the nation), and he missed a full game against UAB. In games he played in, Ballard only failed to find the end zone twice; against Florida and Alabama. Ballard also added 968 rushing yards to go along with 106 receiving yards.

Fletcher Cox
The defensive end will try to cause chaos on the offensive line. To win the Conerly, any defender must stand out and make game changing plays; the NCAA does not keep official defensive stats.

Kentrell Lockett
Lockett is the biggest proven game changer Ole Miss has on its roster. The Defense let the Black Bears down last season, allowing comebacks and close losses. Lockett will try to change that as well as pick up hardware nationally and the Conerly.
Southern Miss

Austin Davis
Davis has a chance to rewrite the USM record books and replace a guy named Favre. The four-year starter at quarterback has put up numbers year after year. In 2010, Davis threw for 3,103 yards, adding 452 yards on the ground and a whopping 30 combined touchdowns. USM's C-USA hopes will rest on Davis' shoulders offensively.

Korey Williams
If USM's C-USA hopes rest on Davis for the offense, it will be Williams who leads the defense. Williams is on every national award watch list a defensive lineman can be on. It would be crazy to leave him off this list.

Casey Therriault
In just one season in the capital city, Therriault has captured the hearts of the JSU faithful. Therriault threw for 3,436 yards and 31 touchdowns. He added 10 more touchdowns on the ground. Therriault is a finalist for the Walter Payton Award and was a finalist last season for the Conerly.

Brandon Bridge
As a freshman last season, Bridge gave the Braves fan a lot to be excited about. Nicknamed "Air Canada" because he is from Toronto, Bridge played well in his first season. He threw for 2,086 yards and 19 touchdowns. Alcorn fans hope to see even more from Bridge in 2011.

Ricky Wadlington
The senior linebacker for the Blazers is coming off a 2010 season where he had 104 total tackles, 9 tackles for a loss, one interception and one forced fumble. Wadlington led the Mid-South Conference and Belhaven in tackles last season. His totals are the third best in school history for a single season.

Steven Knight
The 2010 season started with promise for Knight until he got injured in the second game of the season. Knight missed the next eight games. Despite hopes for a more productive season following 2009—when he lead the conference in rushing yards, attempts and touchdowns—it was not meant to be. Knight is back for his senior season this year.