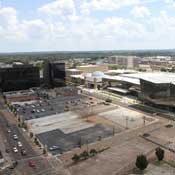 The City Council voted to give city officials authority to resolve all relationships with TCI.

City leaders are racing the clock to make a decision by the end of this month on whether to finance a convention center hotel.

On Aug. 10, the Jackson Redevelopment Authority approved a $15,000 contract with C.H. Johnson, a Chicago-based financial consulting firm that conducted a feasibility study for the Jackson Convention Complex, to assess proposed financing for a downtown convention center hotel.

The city's financial consultant, Porter Bingham of Malachi Financial Group, said the firm would need to complete the assessment by the end of the month for the developers, Dallas, Texas-based real-estate company TCI Investments, to also meet a Dec. 31 deadline for GO Zone Bonds for the development. The process of acquiring and issuing the bonds takes several months.

"My fear is that hiring the consultant will eat up time, and by default, the city will end up in the hotel business," he said. "I couldn't tell you with any assurance that we could get GO Zone bond allocated and sold by the end of the year based on where we are now."

Bingham has worked with developers and the city to come up with an agreement. He said he has no financial interest in TCI.

Jackson Mayor Harvey Johnson Jr. said he is eager to move forward with the development, but the GO Zone deadline has been looming for a while.

"Back in January, we knew the GO Zone bonds would expire on Dec. 31," Johnson said at a Jackson Free Press editorial board meeting Aug. 12. "... In all fairness it had taken time to work out the deal to where we are now. But I am not going to be pressured because of the expiration of GO Zone bonds to put in jeopardy what I think could be a risk of taxpayer dollars."

In 2007, TCI purchased property along Pascagoula Street extending to Farish Street to build a convention center hotel and mixed-use development called Capital City Center. The original plans included condos, retail space and 1,500-car parking garage; however, TCI has scaled back the plans to a $90 million hotel and skywalk to the Jackson Convention Complex, completed in 2009. The development has stalled due to financing issues, and the city has been negotiating with the developers on finalizing a cost-sharing agreement.

In March, TCI Investment Executive Director Alfred Crozier presented the city with a draft of a cost-sharing agreement. The proposal would require the city to obtain 50 percent ownership of the hotel. Under the agreement, the city and JRA would designate the property as an urban-renewal area, and the city would extend the terms of a $7 million U.S. Department of Housing and Urban Development loan that the city gave to the developers in 2007 to purchase the property. TCI paid approximately $17 million for the property, using the HUD loan, a $4 million private loan and other private funds.

Last year, TCI presented a feasibility study by PFK Consultants to the city. The TCI-financed study determined that the 300-room hotel would have to charge $150 per night to be financially viable, but Brookins said he did now how many of the 300 hotel rooms would have to be rented at that rate. Johnson requested an independent study this spring before finalizing an agreement with the developers, JRA Executive Director Jason Brookins said.

"We are saying we will borrow $93 million and pay a loan that the ones we are in bed with have defaulted on," JRA Board member Matt Thomas said.

Brookins responded that the developers have not officially defaulted on the loan.

"In the colored community, if you don't pay, it's considered a default," Thomas, who is black, replied.

Robert Swerdling of Swerdling and Associates was also present at the Aug. 10 meeting. Swerdling, who consults municipalities on financing projects and works with Malachi, gave his assessment of TCI and the deal to the JRA.

"I can't predict how this whole thing will work out," Swerdling said. "... Because (TCI) is a private real-estate company, it is not strong enough to do this deal on its own. It needs the city's financial credit to make it work."

Swerdling said that because TCI owns the property, not the city, the developers are unlikely to walk away from their investment.

"The financial deal is not a bad deal," he said. "It's probably the best deal you can have if you want a private owner. (The city) absolutely needs a hotel. This town is under roomed for the business sector, none the less the convention center."

JRA board member John Reeves floated the possibility of the city buying back the land from the developers. JRA also has the rights to land that TCI owns at the former Firestone Tires site and the old Barefield Furniture property on the corner of Roach and Pascagoula streets. TCI-MS bought the property from private owners for an undisclosed amount in an earlier deal and agreed to place the title in JRA's name. Once the city crafts a final hotel deal, the agreement may allow for the city to reimburse the developers up to $1.75 million for the second property.

Bingham said the city buying the hotel land back from TCI is an option but it could delay the process further because it would take time and money to acquire the property, and it would be difficult to find another developer with enough capital to build the hotel.

"It's not likely that (the city) will find another developer to do a public-private deal, so the city would be left with the reality of building a convention center hotel," Bingham said.

Swerdling added that the majority of developers are spending capital managing distressed assets due to the state of the economy and will likely choose that over building a new hotel.