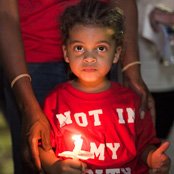 As more than 500 community leaders, families and public officials held candles and sang "This Little Light of Mine" last night, they walked in unison along Ellis Avenue to honor the life of James Craig Anderson and take a stand against racial injustice.

Eighteen year-old Deryl Dedmon, the alleged driver of a pick-up who hit Anderson, is charged with murder and remains in jail. John Aaron Rice, 18, was originally charged with murder but now faces a lesser charge of simple assault and is free on bond. No other teens have been charged at this time.

Vigil organizers placed a wreath and candles at the site of Anderson's murder as a memorial.

Madison resident Suzanne Freedman, who is a member of Beth Israel, brought her 5-year-old daughter and 7-year-old son to the vigil. She said the tragedy has given her an opportunity to teach her children about racial injustice.

Vicksburg resident Marcelina Singleton attended the vigil and said she was shocked when she saw the surveillance video on CNN last week.

"It could have been anyone," she said. "You would think we are above this, but I guess we are not."

Jordan Richardson, who is a senior at Brandon High School, went to school with Deryl Dedmon. He said that he was a victim of Dedmon's bullying.

"I knew the hate that he had in his heart for people who were not like him," Richardson said. "Deryl bullied and terrorized me my freshman year. He would never do it by himself. ... I just felt that it could have been me in that casket instead of (James) Craig Anderson. But this is a great day for the community to come together, black and white."

Richardson said that he fears this incident will scar Brandon with a negative stereotype.

West Jackson resident Cassandra Welchlin and her husband Kass Welchlin stood side-by-side at the vigil with their daughter Zia Brooke Welchlin wearing red shirts with the slogan "Not in My City."

Cassandra, who is a member of West Jackson's Capital Neighborhood Association, started making shirts and organizing the vigil last week. She said the slogan caught on quickly and other community members made their own shirts to wear at the vigil.

She said that she has attended several meetings with concerned citizens over the past week and is planning to host education forums to promote racial justice.

"We are talking about having some kind of dialogue within communities about racial justice--what that looks like and what it means," Welchlin said.

Winston Thompson, who is an attorney representing the Anderson family, called on community members to donate to the James Craig Anderson Foundation for Racial Tolerance.

"The foundation has been established to help promote racial unity, understanding and healing in Hinds, Madison and Rankin counties and the United States as a whole," Thompson said.

The swell of support across racial, religious and economic boundaries last night is a sign that many residents of the entire capital district are willing to join together to move us forward. There were many missing leaders - the mayor made a statement but he wasn't there. The police chief wasn't there. Very few legislators or members of the city council were there - but some were because they knew this was an important event. And our new sheriff was a participant. If he is ready to join everyone in saying "Not in my City-County-Town" he'll have a lot of help from the community.

onewhoknows, an email went around before the event that organizers (and perhaps the Anderson family?) feared it would turn political. My guess is that is why some of the officials did not attend. I did not see the district attorney, either. Sheriff-elect Tyrone Lewis was there, but not in a prominent or political way.

"Sheriff-elect Tyrone Lewis was there, but not in a prominent or political way." My point exactly - he was there because he believed in the message of event. So did Charles Tillman and Senator Hillman Frazier. A candidate for the legislature from NE Jackson, Dorsey Carson, was also there. They all were present and not "politicing". Where were the other leaders of our community? Is it possible to lead without being political all the time?

Sadly, "onewhoknows," it seems about impossible to do anything around here with politics being attached. I suspect you're even trying to do it.

I'm not sure how we missed it, but Mayor Johnson released this statement Sunday before the vigil. Verbatim: Statement from Mayor Harvey Johnson, Jr. Our prayers and support are with the Anderson family during this time. This was a horrendous, violent act and we want to make sure that justice prevails in this case. The Jackson Police Department has investigated this case and turned the findings over to the District Attorney’s Office. We have also been in contact with the District Attorney’s Office to offer any additional assistance his office might need to facilitate the prosecution of this case.

Some of us didn't miss the statement - see original post. Bottom line - this was an important event. An opportunity for the regional community to band together and start the process of standing up for basic human rights on a local scale. The mayor and other leaders did not think enough of the group to be present and lend their support. And nowhere in the mayor's statement is anything about the vigil and the community support. This is not a political statement and despite your previous attempts to make it political, this is about awakening the community that it is long past time for us to work together instead of against each other in achieveing equity, justice and civility. We need our leaders to be with us on this - publicly.