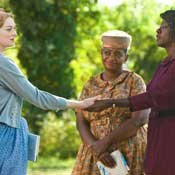 Skeeter (Emma Stone) meets with Aibileen (Viola Davis) and Minny (Octavia Spencer) in the film adaptation of "The Help."

Tate Taylor instinctively understood what he had in common with the characters in "The Help." Like his childhood buddy Kathryn Stockett, who wrote the bestselling novel, and the film's producer Brunson Green, Taylor grew up in Jackson. For the handful or so who may not have read the book, "The Help" is set in the Jackson of the early 1960s, where separate was thought equal, the White Citizen Council and the Ku Klux Klan ruled, and Byron De La Beckwith murdered Medgar Evers. Fully aware of the complex dynamics that underlie Mississippi's civil-rights history and how Mississippians loathe Hollywood clichés, Taylor doesn't reduce the movie adaptation of "The Help," which he directed from his screenplay, into simplistic black-and-white stereotypes.

The movie trailer warns us that some scenes may be funny, and that's the brilliance of the film. Instead of using a heavy hand of blame to condemn past wrongs, "The Help" starts with a simple premise: Everyone has a reason for who they are, even Miss Hilly (Bryce Dallas Howard), who raises money for starving African children, yet refuses to allow her domestic help to use the family commode. When the characters in this film are at their most ludicrous, Taylor puts us inside their skins, so we're laughing—and sometimes crying—at ourselves.

The movie chronicles the relationship among Aibileen (Viola Davis), Skeeter (Emma Stone) and Minny (Octavia Spencer). While their stories are touched by the changes in southern life at the time, they are not representative figures of the era. This film is essentially about how they change each other through Skeeter's compassion, Aibileen's sorrow and Minnie's anger to find the courage to tell their stories.

"I knew I would be a maid," says Aibileen, who cooks, cleans, irons and polishes silver for the Leefolt family. The Leefolts are stretched beyond their means, but appearance is important to Miss Leefolt (Ahna O'Reilly), who suffers from postpartum blues, has the personality of a sponge and exists only to nod her head in agreement with her bossy Junior League friends. Aibileen keeps her feelings secret and loves as her own the red-hot hollering Mae Mobley (Eleanor and Emma Henry). "You is kind. You is smart. You is important," Aibileen repeats to her young charge.

Skeeter, who was raised by their family's black housekeeper Constantine (Cicely Tyson), understands Aibileen's devotion to the child. Her mother, Charlotte (Allison Janney), ignored her when she was a child because she didn't fit into her own third-runner-up, beauty-queen shoes. Charlotte loves her daughter, but doesn't understand her and tries to figure her out. "Your eggs are dying," she tells her. No response. Finally, she just blurts out: "Are you having unnatural thoughts?" Charlotte simply cannot wrap her mind around the fact that her daughter wants a profession, not a marriage and family.

The bossy and sharp-tongued Minnie bears the most difficult burden of all. She's the victim of domestic abuse at home, and she works for the abusive Miss Hilly, who is nothing like Missus Walters (Sissy Spacek), her sweet and eccentric mother. When Minny uses the indoor toilet at Missus Walters' suggestion, Miss Hilly terminates her on the spot and then spreads rumors that Minny is a thief. After Miss Hilly's slanderous rampage, the only white woman who will hire Minny is the sexy outcast Celia (Jessica Chastain), who had the audacity to marry Miss Hilly's beau from Ole Miss. Miss Hilly is an equal-opportunity hater for all who undermine her in any way.

Those of us who live in Mississippi know that none of this is far-fetched. Southern women—bless their hearts—are big personalities. That's why we love them, flaws and all. I can't imagine a more perfect ensemble of actors to bring these characters to life. Stone, Davis and Spencer partner flawlessly, and their performances achieve a beautiful equilibrium. Janney, who is one of my favorites, brought tears to my eyes, both from laughing and crying. I do not profess to be impartial, but the performances in this film, particularly from Spencer, Davis and Stone, are Oscar caliber.

Under Taylor's skilled direction, we care about the characters. This movie ropes us in and gets us involved. We see something less flashy than race riots, but something more grand and telling. With the exception of Miss Hilly, who is stoked into the perfect hypocrite, the women in this film are not rigged up. Skeeter, Aibileen and Minnie are imperfect and scarred, but remain hopeful.

One woman told me after the screening that it was important for her daughter to see the film. "Times have changed in Jackson," she said. "I wanted her to see what it was like. ... Back then no one could imagine an African American president, but it's happened."

"The Help" is eloquent, funny and does more to promote racial understanding than most other movies made about the Deep South.