Locking Into the Rhythm 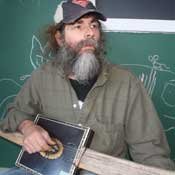 Bill Abel, from Duncan, Miss., plays raw blues on guitars he makes himself.

Bill Abel stands alone with his blues. The 48-year-old Delta resident (a Belzoni native, now living in Duncan) performs as a one-man band, playing electric guitar, singing, and keeping rhythm by playing drums and cymbals with his feet. Abel cranks out raw, unvarnished blues with a cutting guitar sound and mournful, gruff vocals that transport listeners to a dark and lonely spot in the Delta.

Abel has many other artistic pursuits in addition to his music. He's a prolific oil painter, a recording engineer and an instrument builder. He makes diddly bows and cigar-box guitars, fashioning their necks from driftwood he collects alongside the Mississippi River.

You started out in the blues playing bass for the late guitarist Paul "Wine" Jones. What did you learn from him?
I learned the open format of the juke-joint blues. You go with what you feel, and there are no set changes. It helped me to learn the groove of the music. They're not easy grooves to learn, but when you have them, you can play anything along with it that you feel.

You're known for your skillful guitar work backing up older blues musicians like T-Model Ford and "Cadillac" John Nolden, which is much harder than it appears. How do you this?
You have to listen real close and know how to hang back and follow them, but not too far behind. You have to play with them. You watch their body gestures. But if you've got the groove, then it takes care of itself.

There are a number of people building cigar-box guitars these days, but yours are unique in that you make your guitar necks from driftwood. How do you choose the right piece of wood?
It's the opposite of what you think. Guitar necks are made out of hard woods: oak, maple, stuff like that. But this (pointing to his guitar neck) is made out of a super-light wood: cypress. And for some reason, the cypress just vibrates the cigar box to death, it will almost fall out of your hand. It just vibrates, and you really get a unique sound.

What are the advantages and disadvantages of work­ing as a one-man band?
One of the advantages is that you can lock into your own rhythm and do things that you can't do when you play with someone else. You can turn the beat around whenever you want to and twist it, change the timing and stuff like that.

The disadvantage is carrying all the stuff around. I've gone out to play at an outdoor thing where I had to supply a P.A. system. So I took a P.A., a drum set, amplifiers and all that. It's just crazy.

You've also recorded many Delta blues musicians and you specialize in recording them in their everyday environments rather than in a studio. What has been one of your more unusual recording sessions?
I've got a recording I did of playing with (the late Delta blues guitarist) David Lee Durham at a juke joint in Shaw. And the police raided the place. It got busted because they were gambling in the back. And so it's on the recording, you hear "OK, put your hands up!" I had my eyes closed while we were playing, and I hear that. I open my eyes, and there's the police pointing guns at everybody. Later on, it all settles down, and David Lee kicks back in, the blues kicks back in.

You've re-habbed your home in Duncan, and you do a good bit of work with your hands. Have any tips for aspiring carpenters?
Wear a dust mask, use a square when you're doing carpentry work, and save your bent nails because these days they cost $3 for 20 of them.

Bill Abel plays at the Welty Commons at 8:30 p.m. Thursday, April 28. Jonathan Sims from Welty Commons will play drums for Abel. For more information, call 601-352-3399. To learn more about Abel and his many artistic pursuits, check out "Bill Abel: Portrait of an Artist," a documentary made by Barefoot Workshops at: http://www.vimeo.com/12078330.