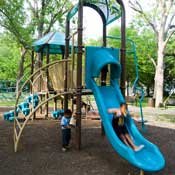 An April 13 fight near the new Fondren Park has raised questions about how residents should address safety.

An April 13 fight involving a group of preteens and young adults in Fondren Park has resulted in a flurry of responses on the OurFondren Neighborhood Association's online community message board, raising questions about how neighbors should respond to safety concerns.

Resident Jodi Robertson posted that she had called 911 on April 13 after seeing a "mob" of people shouting, wrestling and fist fighting in the new park at the corner of Northview Drive and Dunbar Street, spilling into the street.

Robertson told the Jackson Free Press that about 20 to 30 preteens and young adults were involved in the fight.

"Just about everyone who I saw was shouting and yelling and interacting," she said.

When a female police officer arrived on the scene minutes after her call, Robertson said she watched a girl, probably in her late teens or early 20s, take a 3-foot 2-by-4 piece of wood out of her car and walk back into the crowd.

"As soon as (the officer) got out of her car, it looked to me that she couldn't handle it by herself," Robertson said. Moments later, three other police cars patrolling nearby arrived as backups.

Robertson posted her account online on the OurFondren forum within an hour of the incident, provoking a response from residents concerned about the park's safety and reputation. As the comments heated up, the forum's administrator ended the thread.

"Time to move on before crossing any lines for appropriate forum comments," the administrator wrote. "… We do restrict access to this forum to residents, owners and businesses in Fondren. Of course, that doesn't restrict anyone receiving these messages from forwarding them."

Jackson Police Department Precinct 4 Commander Wendell Watts describes the incident as "a bunch of kids fighting." Watts said having more officers arrive to an in-progress crime is standard procedure. "Anytime we have a fight, we send back-up," he said.

Watts said a young male and female got into a fight, and several other females and males "jumped on" the young woman. The two young people who began the argument are the only ones listed on the police report, he said, and both are under age 16. Watts said that the only injuries were a few scratches and bruises, and the minors do not face any charges.

One resident posting on the site wrote that residents should report any group violence as "gang violence" when calling the police so that more patrol cars will arrive on the scene.

Brad "Kamikaze" Franklin, a Jackson Free Press columnist whose home is near the park, warned that improperly labeling a group of teenagers as a "gang" could cause more stigmas and problems.

"I am concerned about the safety of the park, mainly for my 1-year-old daughter and family, but we have to get out of the mindset that a bunch of black kids together are a gang," he said. "This incident was not a gang incident," he said.

Franklin added that he wants the park to be a place for youth and fears that police will run off groups who neighbors claim are involved in a gang.

Watts confirmed that the incident was not gang-related, and did not know of any active gangs in Fondren.

"A gang is described as an organization for criminal activity," Watts said. "Together, they plot out different crimes such as an auto-theft ring and cut (cars) up to sell parts. Drug cartels are also gang related."

He added that when JPD prioritizes its calls, in-progress crimes such as shootings, fights and break-ins have first priority. Calling an incident "gang activity" doesn't change the response time or amount of patrol cars, Watts said.

Speeding to a crime scene, he said, adds the risk of causing an accident.

On April 28, Fondren residents have the opportunity to discuss this situation and other concerns during JPD's monthly COPS meeting.

Fondren resident Kathy Clem said she hopes a face-to-face meeting will clear up any confusion.

"For all the residents who wanted that park—that is so beautiful and a gem in Fondren and the city—we can talk about these sort of things instead of them being put on a message board," she said.

Franklin, who supports having more security in the area, said the forum serves as a good place to notify residents of incidents, but the conversation must continue face-to-face.

"Luckily, I'm participating on forums, and there is no telling what would have been said if I hadn't been able to help calm things down. … The forum is good. It alerts you to things that are going  on, but it's not the best place to continue discussions," he said.

I wonder if the DA's office will send a rep to the COPS meeting? They've been notably absent so far.

The folk who attend this meeting will never say in there what they've said to folk who they feel "comfortable" with. But hey.........I suppose Fondren isn't an exception to profiling SMH

Mr.Head, I want to make sure I'm understanding your comment. You're saying that you went to a neighborhood meeting in which white residents told black police officers they "owned" them? My brother is a JPD officer and has been for 7 years so I thought I'd run that by him. He had a good laugh and mentioned how ridiculous it was and pointed out that even if there really were people that stupid it would have served only to lessen the security in the neighborhood. But he felt pretty sure it would have been common knowledge throughout the department had a remark like that been made to one of his fellow officers. So if you'll forgive me I'm going to have to call bullshit on that and wonder why you chose to make something like that up? As for the remainder of your post I agree black teenagers shouldn't be called a "gang" but I'm pretty sure the good men and women of JPD don't show up with guns blazing simply because some evil white person branded someone a gang. People like you keep the hate alive don't you?

I'm trying to follow your point Alex. What "hate" are you referring to exactly. Hate of police? What?

Alex0393, tone it down. You can disagree with someone without cussing or accusing someone of lying. We got it that you and your brother disagree. That doesn't quite qualify as evidence that some Jackson citizens didn't speak that way at a meeting. If you want to find racism in the Jackson area, all you have to do is read the comments on any Clarion-Ledger story (or any of our local "conservative" blogs) with a racial aspect. Under cover of anonymity, some of our fine upstanding citizens can become downright ugly, mean and disgusting—and blatantly racist. Falsely labeling a group of people a "gang" is simply wrong. And it is racist behavior, regardless of whether you believe it happens.

Possibly, but I'd be more inclined to blame people who make phony 911 calls, or who tell officers that they "own" them. Touche, Mr. Head. I'm with you: Some of my best friends are cops. Or at least used to be.