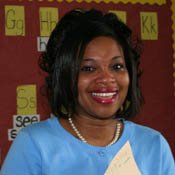 Tracey Clemons-Frazier is an acclaimed teacher at McWillie Elementary, which celebrates its "Star School" status today.

Tracey Clemons-Frazier knows that Jackson's McWillie Elementary School is something special. A 10-year veteran teacher at the school, Clemons-Frazier believes that committed parents, dedicated teachers, a strong administration and an engaging curriculum help make McWillie one of Jackson Public Schools' most successful. This evening, students and staff at the school celebrate McWillie's status as a "Star School," the highest designation on the statewide school grading system.

Clemons-Frazier, 40, grew up in Noxubee County and moved to Jackson to attend Jackson State University.

"I wanted to make a difference in the lives of children," she says. "I remember that in my childhood there were people that were foundational blocks, that I still remember. I wanted to be one of those people."

By all accounts, Clemons-Frazier is well on her way to being one of those people. In 2008, then-Superintendent Earl Watkins named her the district's Teacher of the Year.

Clemons-Frazier earned bachelor's and master's degrees in elementary education from JSU before joining JPS as a teacher at Davis Magnet Elementary School in 1994. She spent eight years at Davis before moving to McWillie, where she teaches students between 3 and 5 years old in the school's Montessori program.

The Montessori program, which emphasizes self-directed, hands-on learning, allows Clemons-Frazier to focus on helping her students become leaders, she says. A mother of three--all of whom attend or have attended McWillie themselves--she says that the school benefits from an involved corps of parents.

"People are really excited about what they get when they come inside," she says.

Clemons-Frazier also credits McWillie's principal, Margrit Wallace, with being an understanding and compassionate leader. Last May, when her mother underwent open-heart surgery just as the school year was ending, Wallace allowed her to take time off to be with her mother.

"She called to check up on me, just as if I were her child," Clemons-Frazier says. "Dr. Wallace called every day to make sure that I was coping."

Great teacher and a great school! Thanks for publishing good news about JPS. Plenty is out there....