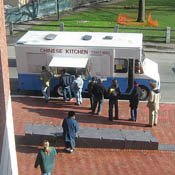 Local business owners expressed concerns earlier this month that a proposed ordinance would put their restaurants at an unfair disadvantage if food-truck owners did not have to meet the same standards such as paying a 2 percent sales tax and meeting Mississippi Department of Health food-safety requirements.

The revised ordinance requires food- truck operators to apply for a $500 permit from the City of Jackson, and either have a kitchen inside their truck or prepare food in a brick-and-mortar location that the Department of Health approves. Food trucks must also operate 150 feet from "any non-mobile business selling food."

Jeff Good, co-owner of Broad Street Bakery, Sal & Mookies , and BRAVO!, met with Whitwell last week, and while he has not read the revised ordinance, he praised Whitwell for working with the business community.

"I am impressed with the number of people he is talking to," Good said. "He's being very serious and genuine in crafting something that makes everyone happy."

"I am for free market, tax compliance and if the health department signs off on these trucks, I'm 100 percent for it," Good said. If they are licensed and pay their taxes, Good says, "let the taco truck roll."

Whitwell said that after several different variations, he is satisfied with the current ordinance.

"Any requirement a restaurant owner has on them, we have required on the food truck folks to level the playing field," he said.

Whitwell also said he wants he ordinance to cut down on illegal vendors.

"One of the things I hope that this ordinance does is get rid of problems we already have in current law," Whitwell said. "We have illegal catering going on and a number of people without permits who are selling food out of trailers and trucks. All of those people will now come under this ordinance and have to comply with these laws as well. "

Sid Scott, owner of the up-and-coming food truck operation Gringos Tacos and Tortas, said opening his operation is dependent on the city council passing a food- truck ordinance, but he hopes to open at some point this spring. Currently, mobile food-vendor permits are only good for one day in the city.

"We are in favor of the revised ordinance," Scott said. "It's fair, and it's really needed."

The city will hold a public hearing on the proposed ordinance 6 p.m. May 5 at City Hall.

It's amazing Q has been able to work with the community so well on this despite his big business/lobbying background.

Just wait. Soon they'll try to rename this ordinance and Whitwell will refuse to participate.