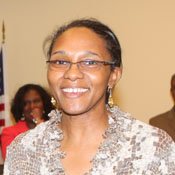 Brunetta Sarpong may not get paid for the work she does, but that doesn't mean she takes her title of volunteer lightly. On April 19, Jackson Public Schools named Sarpong the district's Parent of the Year for the 2010-2011 school year.

Sarpong, who is the parent of Murrah High School junior Samuel Sarpong and Chastain Middle School eighth-grade student Matthew Sarpong, wants all students, including her sons, to succeed in school. Sarpong is the secretary of Chastain's Parent Teacher Student Association and vice president of Murrah's PTSA.

She also works with Jackson Public Schools' Strings in the Schools program and the Mississippi Youth Symphony. The strings' program provides professional music instruction for the district's elementary school students, and the Mississippi Symphony Orchestra performs a concert with kindergarten students twice a year.

"I work hard because I know that involved parents make a difference in the lives of our children and their education," Sarpong said in a statement. "Our children's future depends upon the choices and actions that we make today."

Murrah High School Principal Fredrick Murray describes the stay-at-home mom as a parent "who goes beyond the call of duty."

"Frequently, she steps out of her official PTSA role to support students in need," Murray wrote in a letter to the school board. "She is a mentor to students who need a mother or even a father figure."

Chastain PTSA President Charles Araujo says Sarpong is a quiet individual who is dedicated to the educational needs of children. At Chastian, Sarpong works with Araujo and Parents for Public Schools to form a leadership team to increase parent involvement in the district.

"She is an example of someone who not only cares, but tries to do something about her beliefs each and everyday," Araujo wrote in a letter to the school board.