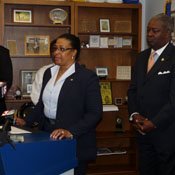 Constance Hester-Davis of the Bureau of Alcohol, Tobacco and Firearms, announced yesterday that Jackson's crime "spike" was one reason for the ATF assigning an agent to the city police department.

Jackson Mayor Harvey Johnson Jr. worked quickly this morning to tamp down the perception of the capital city as a "hotspot" for crime.

Overall, crime in the city dropped 6.7 percent compared to this time last year, with total property crime down by 3 percent and violent crime down by 27.3 percent, according to press statement Johnson's office sent out today.

The mayor's office released the preliminary statistics, available at weekly COMSTAT meetings, after Bureau of Alcohol, Tobacco and Firearms Assistant Special Agent Constance Hester-Davis said the city's increase in crime is one of the reasons for the assigning an ATF agent to the Jackson Police Department.

"With the spike of increase in crime in this area, we knew that something had to be done, so we all got together and held a meeting (with city officials) and said, 'Hey look This is what we can do,'" Hester-Davis said to reporters, with the mayor standing by.

Johnson contained himself when reporters asked Hester-Davis to repeat herself: "One reason (for the collaboration) is the spike of crime in this particular area," she said. "Before, we were concentrating our efforts ... all over various counties in this area, but because this is now a hotspot, we're focusing all efforts here in Jackson."