Going for the Guns 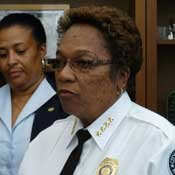 Jackson Mayor Harvey Johnson Jr. says a new Jackson Police Department partnership with the Bureau of Alcohol, Tobacco, Firearms and Explosives will help get dangerous weapons off the street.

Johnson praised the ATF-JPD partnership at a press conference last week. He said it will help streamline federal gun violations into federal courts by sending an experienced ATF agent directly to JPD gun-crime scenes. The collaboration will also give city police faster access to ATF's National Integrated Ballistics Information Network, a database containing bullet, casing and projectile information gathered at other crime scenes that could provide a link between seemingly unrelated gun crimes.

Every individual gun puts a marker on each projectile fired from its barrel, and another marker on the bullet or shell casing, potentially identifying the weapon and tracing it back to its source or purchaser if the weapon is already entered into the ATF's system.

The partnership between the city and ATF is not a first. Jackson Police Chief Rebecca Coleman said the city already has people working with agencies like the ATF and the FBI to discourage gun crimes, which are federal violations.

"We have a Cease Fire Unit with assistance from ATF and the U.S. attorney's office. An officer is assigned to this unit from the JPD. (The unit) investigates all gun-related crimes and researches all weapons recovered by the police department," Coleman said last week. In 2010, the unit handled more than 71 felony cases of firearm possession, she said, researched more than 480 felony and non-felony cases, and successfully traced more than 500 firearms. Coleman said prosecutors managed to put 44 cases before a grand jury in 2010.

The new agreement differs from earlier partnerships in that the ATF will now install agents directly inside the city's police department.

Bureau of Alcohol, Tobacco, Firearms and Explosives Assistant Special Agent Constance Hester-Davis said another improvement is that the ATF will upload new weapons data to the NIBIN system more quickly.

Crimes involving prior felons owning a gun are of particular interest. Aside from giving prosecutors extra bargaining power in getting plea deals, Coleman said many felony gun violations charges end up prosecuted in federal court, further relieving the strain upon the county court system.

"This new effort, we hope, will increase the number of arrests and prosecutions of cases of violent firearm crimes through the federal court," Coleman said.

Local leaders are not the only ones who want guns off the streets of Mississippi. In 2005, representatives of the Chicago Police Department told the Jackson Free Press that Mississippi was a popular source for illegal weapons making the rounds in Chicago alleys and blood-covered crime scenes.

"You guys in Mississippi are really killing us with these guns—you and Indiana," said Patrick Camden, spokesman for the Chicago Police Department in 2005 and now retired. "We confiscate about 10,000 guns a year on an average, and with that in mind they continue to come in. You can't legally own a handgun in Chicago, but, oh yeah, they're finding a way to circumvent those laws with your help. Indiana comes in as a close second, but I think you're still No. 1, Mississippi."

The news hasn't changed much over the past six years. A September 2010 report from crime-monitoring group Mayors Against Illegal Guns claims just 10 states supplied 49 percent of guns crossing state lines and recovered at crime scenes.

Chicago is clearly feeling the results of the nation's Top 10 gun suppliers. The state of Illinois, according to the report, exported 844 crime guns, but imported 3,643 crime-scene firearms from other states, including Mississippi.

The group claims lax state gun-control laws have plenty to do with Mississippi being the "go-to guy" when looking to put a hole in somebody. Many states have laws mandating local and state prosecution for falsely claiming to be the actual gun owner on required gun-purchasing paperwork, commonly called straw purchasing. Some states have laws against falsifying information on gun-purchasing documents, and laws against a gun dealer failing to conduct a background check on a gun buyer.

The federal government has such laws, but some states do not have parallel laws, which the organization says "provide additional opportunities for prosecution and enforcement, and create opportunities for federal and state law enforcement to work together and leverage their resources."

Mississippi is one of the 21 states that have none of these laws.

Couple comments: "The federal government has such laws, but some states do not have parallel laws, which the organization says "provide additional opportunities for prosecution and enforcement, and create opportunities for federal and state law enforcement to work together and leverage their resources."" It's a Federal Crime to be a straw purchaser, and you are correct, MS does not have a law on the books that deals with straw purchasing. This is a FEDERAL thing. Are you suggesting that Mississippi pass a state law that mimics Federal law? (Didn't Arizona do this with Immigration and got their hand slapped by the Feds?) Also, I feel confident that you have heard of Operation Gunrunner, or Operation Fast and Furious. This is an ATF Sanctioned, yes sanctioned, project where they FORCED federal firearms licensed gun dealers to SELL to straw purchasers in Arizona and Texas (that we know of) and these firearms were literally allowed to leave the USA into Mexico. Who knows where else. I hope that you would research the ATF Congressional investigations that Senator Grassley and Representative Issa have launched and not just take my word for it.

Sounds like Chicago needs to get rid of their unconstitutional hand gun ban. The Supreme Court already ruled D.C.'s handgun ban was unconstitutional so Chicago's is too. Your definitiona of a straw purchase isn't quite right.A straw purchase is when someone who can leally buy a firearm buys a one for someone who is not legally able to own or buy a gun. Federal law allows you to buy a gun for someone who can legally own one. There are millions of husbands,wife,parents and buddies that have bought guns for gifts for someone. Not a thing illegal about that.