Malaco Picks Up the Pieces 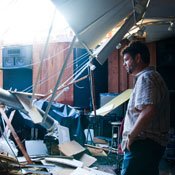 Tommy Couch, co-owner of Malaco Records, surveys damage in the record company's recording studio the day the tornado destroyed it.

Shards of metal, fiberglass insulation and water filled the inside of Malaco Records' recording studio as co-owner Tommy Couch Jr. recalled the notable musicians who have made music in the now-destroyed space.

Since 1967, the studio has been home to hundreds of nationally acclaimed and local blues and gospel musicians. In January 1973, Paul Simon recorded part of his "There Goes Rhymin' Simon" album here. The same year, Dorothy Moore recorded the Grammy-nominated album "Misty Blue" in the space.

On April 15, a tornado destroyed the historic landmark's executive offices, ripped open its distribution warehouse, took the roof off the recording studio and caused the company's cinderblock security wall to collapse. Couch, however, appeared calm as he recounted the day's events.

Around 11 a.m., Couch was organizing CDs and making plans for the day when he and seven other employees gathered around the office's back window to see a low-hanging dark cloud descend.

"We started to see the rotation, and it started picking up," Couch said. "You know that noise you hear about? We just started feeling that pressure, and I thought this is about to be something. ... I took about two steps (outside) and the wind was pushing me, just like a hand."

When they realized they were in imminent danger, the majority of the music company's employees ran to a large vault in an adjacent office building, which contains rare and valuable artifacts.

Couch said he is amazed that no employees were injured or killed during the storm.

"We had three people (that didn't make it into the vault)," he said. "Someone started screaming for them. But they were OK. Somehow they had gone to one of the bathrooms and huddled down."

Around 5:30 p.m. that day, men driving excavators scooped up piles of rubble from the parking lot while family members tried to salvage furniture and documents from the offices. With the security wall destroyed, Couch feared that looters would come during the night and was working quickly to move filing cabinets, albums and mementos to an alternate location.

"There is a lot of history here; we are trying to save as much as we can," Couch said, adding that it was too soon to know if any important artifacts were lost.

"Make sure you wipe off your feet," an employee joked as a photographer and I walked into a pitch-black hallway leading to the recording studio.

We felt our way through the dark until we found the studio where sunlight pours in through a gaping hole in the roof. Couch dug through the debris so he could show us a grand piano buried underneath. A non-glowing neon sign reading "Annie Mae's Cafe" hung above the rubble. The sign is from Mississippi blues musician Little Milton who recorded his music at the studio.

As Couch took the last sip out of his water bottle, he let the empty container fall on the ground.

"I would normally put this in the garbage can, but I guess it doesn't matter now," he said.

Behind a glass window that looked into the studio, Couch covered a mixing table with tarps to try and keep moisture out. He estimated more than $100,000 worth of equipment was damaged.

On April 18, contractors completed demolition of the part that housed Malaco's executive offices. Employees temporarily relocated to a new office space in Fondren Plaza and hope to serve customers by the end of the week.

Other businesses on Northside Drive ,including the Hamp's Place nightclub, also suffered damage.

"For me, I wouldn't go anywhere other than Malaco," Rogers said.

"Malaco is a staple. It's been a staple since the '60s, and they are a historic landmark. To be able to say you were part of making history--to be around the presence, and the feeling of it all--it was great. It's kind of like, what now? When you put together a quality CD or demo, you want to put quality people on it. Now I'm not sure where I am going to go."

Lacey, thank you for this well-written account. I know you will keep us posted about Malaco's efforts from here on.