Tornado Victims Pick Up the Pieces 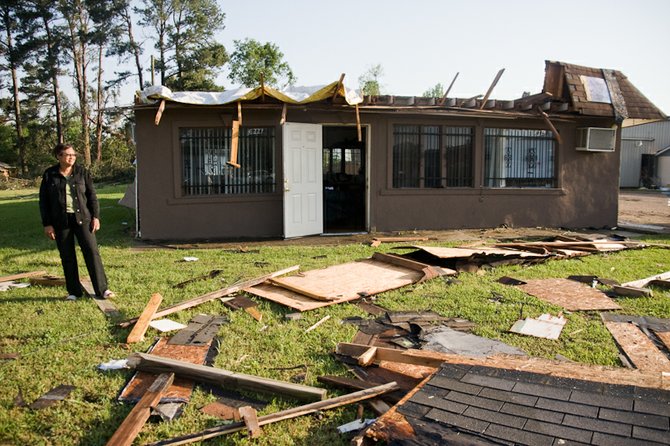 Cora Coleman, owner of Lamode Stylett and Barber Center, surveys the damage outside her business on West Northside Drive Photo by Aaron Phillips

After tornadoes and high winds swept though Jackson Friday morning, the city blocked off West Northside Drive between Sunset Drive and Methodist Farm Road. Around 5 p.m. dozens of Jackson Police officers were busy securing the area, while clean-up crews cleared debris from the roads. Mothers and children from the surrounding areas stood in their front yards talking with neighbors and surveying the damage.

Cora Coleman, owner of Lamode Stylett and Barber Center, on West Northside Drive, had three women in her shop when a tornado made its way through the area. She was giving one of them a perm when she heard the tornado coming closer. She tried to coax the women into a nearby hallway but they were so scared they froze and couldn't move.

Around 5 p.m., she was packing boxes of curlers and hair products into the back of her blue Chevy Silverado. Shards of wood from the facade of her store littered the yard and jutted from the top of her building.

Coleman has owned her beauty shop for the past 27 years. She lives nearby in the Presidential Hills neighborhood. Coleman says her business is her "home away from home."

"You see in on TV but hope and pray that it never happens to you," Coleman said about the tornado, as she moved a box from her shop.

Fiberglass insulation, resembling cotton candy, hung from the ceiling where the roof sank in after the tornado passed through. Water trickled onto the floor from some area and onto the three navy blue styling chairs. Colemen appeared shaken, but she's thankful that no one was hurt.

Not even a tornado, however, could stop Coleman from doing hair. She finished giving her customer a perm without electricity.

"The water pressure was a bit slow," Coleman says. "But I didn't care if I had to go get a bucket. We were going to get those chemicals out of her hair."

Other businesses in the area include historic Malaco Records, which suffered extensive damage to its executive offices, recording studio and warehouse. Hamp's, a night club, suffered minor damage.