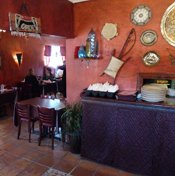 Several new restaurants are opening their doors in Fondren. The most recent is Petra Cafe, formerly of Clinton. The Mediterranean restaurant closed its second location (the first is in Hattiesburg) last month and relocated to the former Jerusalem Cafe site on Old Canton Road, opening officially last week. The new Petra boasts an entirely renovated interior. Owner and operator Ayman Albataineh says a remodeled outdoor seating area, with a roof, should be complete in one week. From 11 a.m. to 3 p.m., Petra offers a lunch buffet for $9.99. The restaurant serves dinner seven days a week.

Campbell's Bakery Open, Again
Fondren mainstay Campbell's Bakery reopened under new owner Mitchell Moore March24. Moore, who previously operated a private catering business specializing in cheesecakes and worked as a pastry chef at Nick's Restaurant, purchased the business in February. The renovated bakery is now open from 10 a.m. to 6 p.m. Tuesday through Saturday. Moore adds an array of his own specialties, such as cheesecakes and cannoli, to Campbell's existing menu of cakes and cookies.

Finding Young Entrepreneurs
A new citywide initiative brings together a number of organizations to target young adults interested in starting their own businesses. Business Entrepreneurship Training Collaborative for Young Adults, or BET4YA, aims to bring existing businesses and business owners together to provide coaching and mentoring to budding young entrepreneurs. BET4YA seeks to create a network of businesses that can refer young adults between the ages of 14 and 21 to workshops in entrepreneurship.
BET4YA is a project of the Jackson Business Accelerator Collaborative, New Horizon Ministries and PRIYDE Institute.

Regions Building Fills Up
Regions Plaza, which has suffered increasing vacancy in recent years, has two major new tenants. Jackson-based Duckworth Realty, which leases office space in the building for California-based owner Hertz Investment Group, announced March25 that the state Personnel Board and a division of the Department of Finance and Administration have signed leases for more than 50,000 square feet of space.

In a statement, Duckworth Realty said that the new tenants increased occupancy of the building by 15 percent. Duckworth expects the Personnel Board and DFA's Mississippi Management and Reporting System to move in by late May or early June.