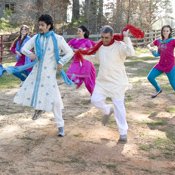 The 20 minutes the Crossroads audience gets to see of Anita Modak-Truran's film-in-progress, "Dante," will undoubtedly leave them wondering, "What's up with Dante?"

The film, named for its protagonist, immediately introduces viewers to Dante and his mother, who's cooking breakfast. If for no other reason than hearing his mother's annoying voice yelp her son's name, Dante garners immediate sympathy, and compassion grows when the awkward teenager questions his mother about why she chose to name him Dante.

"You know what your dad wanted to call you?" his mother asks mockingly in response to the boy's question. "Barry."

That doesn't matter much, though, Dante says, because his dad isn't around. By the end of the work-in-progress, Modak-Truran gives us a glimpse of the boy's father--a guy clad in white, mediating in the middle of the forest.

The film is shot well with visually interesting angles that parallel the curiosity the piece piques. From the unexplained relationship between Dante and Basil, who works at the family's pizza parlor, to the Bollywood-styled closing, "Dante" leaves you with questions you want the questions answered. One can only hope he doesn't have to wait until the next Crossroads Film Festival to

The screening of "Dante" is during the Mississippi Showcase starting at 11:20 a.m. Saturday at Malco Grandview Theatre in Madison.