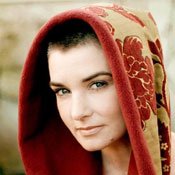 Sinead O'Connor is one of the many Irish-born singers who came to prominence in the music scene in the 1990s.

St. Patrick's Day and surrounding festivities are nearing, and you wouldn't mind blasting some Irish-sounding music in the background as you're getting ready for your day, but you're just not down with traditional bagpipes and the Irish flute.

That's OK. Go to the storage closet with all of that junk in it, and blow the dust off your old cassette tapes and CDs from some of the most popular Irish-born musical acts the United States has ever known. You have plenty to choose from (Van Morrison's "Brown Eyed Girl," Bob Geldorf's "I Don't Like Mondays," U2's "With or Without You" and the like), but this writer's personal favorites are The Cranberries and Sinead O'Connor.

The Cranberries came to national attention in 1993; by 1994, everyone knew them when they sang their unforgettable alt-rock noveau-classic "Zombie" from the album "No Need to Argue." The band was arguing, though. "Zombie" protested the political unrest in Northern Ireland at the time. You can't get too much more Irish than that.

O'Conner, the Prince-penned "Nothing Compares 2 U" singer, was in a league all her own. Music execs tried to shove her in a pop box, but she broke down those cardboard walls when she ripped up a picture of Pope John Paul II in 1993 when she was the music guest on an episode of "Saturday Night Live." She was protesting sexual abuse by priests that the Catholic Church tried to keep a secret.

They say rock stars don't protest, but the Irish among them sure don't mind keeping up a little ruckus. That's perfectly fine with me. The only thing better than a call to arms is wrapping that call in well-produced music.