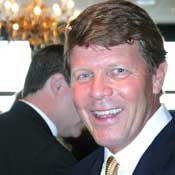 In what appeared to be a cross between a stand-up comedy routine and passionate pro-Jackson monologue, Downtown Jackson Partners President Ben Allen presented an inventory of the city's recent developments and touted the city's cultural capital during a community forum this morning.

Speaking to an audience of more than 40 at Koinonia Coffee House's Friday Forum, Allen pushed several Downtown Jackson Partners initiatives such as a privately funded arena study, which could cost more than $100,000 (a study the city is now spearheading), and Venture Incubator, a business incubator located in the Regions Building. Downtown Jackson Partners provided funding for its start-up costs.

Allen also addressed the challenges the city must overcome to "rebrand its image." He called for more collaboration between the suburbs and the city, while simultaneously taking friendly jabs at them.

"Our suburbs are our friends," Allen said. "The eight suburbs take our per capita income up, but the suburbs don't have what we have: cool, old stuff. ... We welcome our suburbs, but (Jackson) has what is called diversity, and that is not a Mississippi code word for black and white. When you think of New Orleans, you think of diversity. It is a word where everyone is welcome and everybody has things to do."

Allen then shared a story about visiting Madison Mayor Mary Hawkins-Butler where he explained to her the difference in diversity between Jackson and the suburbs.

"In Madison, your diversity is what color BMW do you have," Allen said he told her. "It's where do you play golf: Annandale or Reunion?"

In order to become a bustling city like Baton Rouge, La., or Little Rock, Ark., Jackson must retain a creative class and attract young professionals, he said.

"We have got to recognize what we are up against. Kids today go to college, and the (high schools) brag about how many kids they are going to send away. ... Do you think those kids are coming back? ... We have got to realize what we have here, and we have to capitalize on it," he said.

Audience members raised concerns about expanding all areas of Jackson, beyond downtown, and creating more jobs to alleviate poverty.

Allen answered the poverty question with a reference to perceptions about the Jackson Public Schools. "You have recognize your efficiencies or your perceived efficiencies, and one of the first things is education. We have got to be sure that's the top priority," he said. "And then we have got to make sure--and the mayor is doing a good job on this--that the Highway 80 corridor is developed."

Allen emphasized that he and others have proved naysayers about the city's potential wrong, pointing to his own role in promoting the Jackson Convention Center and the King Edward. "I'm not a cheerleader. I'm a damn prophet," he said to laughter.

"Audience members raised concerns about expanding all areas of Jackson, beyond downtown, and creating more jobs to alleviate poverty." That is why I think it is so important to find out, from each gubarnatorial candidate - how do they plan on using MDA to address those issues in the city in which they are based and where they work on a daily basis? In otherwords - for all the issues and concerns they have with the state of Mississippi, where does Jackson fall on the to-do or honey-do list? I would like that question posed to candidates when it debate time.