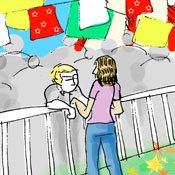 Madison Mayor Mary Hawkins Butler's recent strategy to keep outsiders from attending a city festival is consistent with the city's history of enforcing strict neighborhood covenants and zoning regulations that restrict rental properties in the city.

Madison has long promoted itself as more of a club than a city, but last week, after Hawkins Butler cited Franklin, Tenn., as a model city for a residents-only festival, Franklin officials said they had never heard of such a practice.

Hawkins Butler told the Madison County Herald Sept. 18 that the city was cancelling this year's annual family fall festival, FreedomFest, because of unexpected budget expenditures and the high number of non-Madison residents who attended the event in the past.

The city has traditionally hosted the festival at Liberty Park, which is a public space. The mayor said the festival would return next year and may adopt the Franklin, Tenn., model of requiring attendees to present a pass proving they are city residents.

"A lot of people come from all over the metro area, and it's not that they're not welcome, but this is intended for Madison families," Hawkins Bulter told the Madison County Herald.

Milissa Reierson, communications manager for the city of Franklin, told the Jackson Free Press last week that the city does not require resident-only passes for any of its festivals. "I'm not sure where the mayor got this information, but we don't do anything like this," she said.

Hawkins Butler did not return calls.

Madison Chamber of Commerce President Donna Sims said the festival has little economic impact on the city. She said the city's festival budget of $30,000 for food and activities meant few people were spending money at local restaurants or shops. Sims added that Madison businesses also sponsored the event.

"Food and everything is free, and the city is funding it for the residents, and a lot of times I think they would run out of food," Sims said.

"It was so well attended, which we love, but the taxpayers in Madison are paying for it. It just got to the point that people from all over—while we welcome them—were coming, and it wasn't feasible."

Bear Atwood, interim legal director for the ACLU of Mississippi, said the proposed residents-only policy sends a message to outsiders that they are not welcome.

"I think it raises issues about limiting people from coming on to public property, and by favoring only the people in that town, it may raise constitutional issues," Atwood said. "But the greater concern is no matter what they say out loud, all too often that kind of restriction is designed to keep (out) people who they see as undesirable, and that could be people who are black
or poor, and that raises serious constitutional issues."

Jim Burt, chairman of WellsFest, a family festival held in Jackson last weekend, said, "I have never heard of an exclusive festival just for the citizens of one city." While the city of Jackson does not finance WellsFest, Burt said he welcomed all families from the metro area and state. "I was kind of amazed that they were considering such a thing," he said.

Madison has a tradition of heavy restrictions on apartment units and rental property. Currently, the city has no apartment complexes within its limits.

In 2007, Madison police arrested Madison resident Richard Atkinson for renting out his home after his Northbay Homeowners' Association enacted a ban on rentals. Because the city enacted an ordinance equating covenant policy violations with city ordinance violations, police were able to place Atkinson under arrest.

Later that year, Madison Municipal Judge Cynthia Speetjens found Atkinson not guilty of violating the covenant's prohibition. The prior year the city of Ridgeland considered adopting a similar ordinance but decided not to follow Madison's covenant enforcement after Attorney General Jim Hood issued an opinion in December 2006 stating that such an ordinance overstepped a municipality's power.

"The amendment to the zoning ordinance you propose does not appear to be an ordinance of ‘municipal affairs' or one that serves the general public with respect to the health, safety and welfare of the citizens; rather, such ordinance appears to address private affairs and the particular welfare of a few citizens. Therefore, we are of the opinion that the municipality does not have the authority to adopt and enforce an amendment to the zoning ordinance," Hood wrote in his opinion to Ridgeland City Attorney Jerry Mills.

Madison City Attorney John Hedglin said the city ordinance is no longer in effect after a 2008 Madison county court ruling that the city did have the authority to back neighborhood covenants with law enforcement. "The court eventually ruled that by trying to do that, the ordinance extended too much power to non-elected organizations," he said.

Here's an idea. Cancel all the festivals and use the money to pave some streets. Thankfully we got stimulus money to pave that section of Highland Colony Pkwy near the high school.

Madison is becoming more Orwellian by the minute. Wait...by the second...tic-toc...tic-toc...