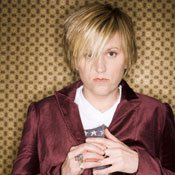 Since her debut album, "Pinwheels," released in 1993, Starr, 34, has gained a national following and toured with Steve Earle, Mary Chapin Carpenter, Shawn Colvin and Melissa Etheridge. This Saturday, Oct.23, she will return to Mississippi when she performs at Unity Mississippi's annual OUToberfest at Smith Park.

While attending Ole Miss in the mid 1990s, Starr played drums for the band "The Living Hand." After a few semesters at Ole Miss, she moved to Memphis, Tenn. where she worked for Ardent Records. In 2007 she marked the released of her seventh album "The Girl that Killed September." On Tuesday, she will release her ninth album, "Relive."

OUToberfest is free and open to the public from 1 p.m. to 6 p.m. at Smith Park (302 E. Amite St.) For more information, visit the festival's website. Unity Mississippi will announce performance times this afternoon on the festival's Facebook page. Bottom of Form