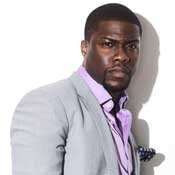 Comedian Kevin Hart will stop in Jackson during his "Laugh at My Pain" tour Oct. 23.

Get ready to laugh out loud with comedian Kevin Hart as he rolls into Jackson during his "Laugh At My Pain" tour Oct. 23 at Thalia Mara Hall.

Hart, 31, has appeared in several movies including "Soul Plane," "Scary Movie 3," "Death at a Funeral," "40-Year-Old Virgin" and "Not Easily Broken." But, it is on stage that Hart shines brightest.

"The movies and stuff are great, I love them, but for me doing stand-up comedy--there's nothing better than that. (The audience is) there to see you, nobody else ... it's Kevin Hart live," he told the Jackson Free Press.

Whether he's talking about his kids--Heaven Leigh, 5 and Hendrix, 2--his fear of gorillas or showing off his foot-shuffle fight moves, you'd have to be a stoic not to laugh. Storytelling is at the heart of Hart's comedy. He shares candid stories about his life and what's he's going through at the time.

"I think when you make yourself vulnerable to the audience, it makes them relate to you even more," he says. "... It's all real situations, real ups-and-downs in my life. I take those things and find the positive in them. Even if it's full of negative ... one thing that I've learned is that out of anything that's bad that happens, something funny happened in the course of it."

Once a shoe salesman at City Sports in his hometown of Philadelphia, Pa., Hart quit his job to pursue comedy full-time. "A lot of people told me I should try stand-up because I was naturally funny. I found a place I could go and perform, which was the Laugh House comedy. ... I won a couple of amateur night competitions for $75 a piece; so I decided, 'You know what, this is it. This is what I want to do, I want to be a comedian,' Hart says.

Hart cites Bill Cosby as his most important influence. "Bill Cosby was a storyteller, one of the best storytellers ever to do it," he says. "... I wouldn't know how to paint the picture that I paint and put people in a situation to see the things that I see if I didn't study a person like Bill Cosby."

Hart says he hopes the audience will get to know him during the show.

What are the top five played artists on your Ipod?
Jay-Z, Lil Wayne, Drake, Justin Bieber and *NSYNC

What was your favorite cereal as a kid?
Fruity Pebbles.

If you were a crayon, what color would you be?
Black, it's my favorite color.

If you could have any superpower what would it be?
X-ray vision.

What was coolest place you've every visited?
Maui.