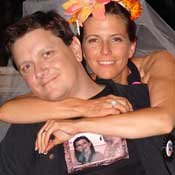 Laughter. That's what Tom Ramsey and Kitty Cook-Ramsey, both 44, agree fuels their marriage. Their humor is contagious. I started laughing as I walked into their home and barely stopped until I walked out.

Tom, who holds a bachelor's degree in film and motion picture production and theater from the University of Southern Mississippi, is a self-proclaimed raconteur, a chef, lobbyist and writer, serves on various committees and boards, and is active in his church, St. Andrew's Cathedral.

Kitty has a master's degree in English from the University of Mississippi and is now the associate director of development at Mississippi Children's Home Services. In her spare time she serves as vice president of diversity at the Association of Fundraising Professionals and has a miles-long list of ways she's contributed to our community.

The two met while attending college at Ole Miss. Although they were best friends, Kitty says Tom never asked her out. Decades later, they met again at what is now the Ole Tavern on George Street, where Kitty was doing public relations for a band and Tom was promoting a musician he was hoping could open for the band. The musicians introduced them, and they immediately remembered each other. They were both divorced at the time, and Tom finally asked her out. Tom notes Kitty's "leaving out the part where she was flipping her hair at me from the bar."

"Tom's hair at this point was so long that he was flipping his at me," Kitty exclaims.

About a year after the hair-flipping and first date took place, Tom proposed in an out-of-character way. He called Kitty and asked if she was available to get married on a date he had free. Kitty said yes, and Tom went about his day.

"I'm a really romantic guy," he explains. "I buy flowers for her, I bring her coffee in bed every morning."

Tom made up for the first proposal by getting down on one knee in front of the guests at Kitty's birthday party this past April and re-proposing to Kitty.

"I always wanted that moment," she recalls. "He gave me that moment."

Kitty has her romantic side, too. Once at a sushi restaurant, Tom told Kitty: "The two things that make me happiest are sake and fireworks. If I ever had sake with fireworks at the same time, I don't think I'd be able to contain myself." The next Fourth of July fireworks show they attended, Kitty pulled out a bottle of sake, and they've shared one at every fireworks show since.

Their Oct. 15, 2005, wedding, at Indian Bluffs Lake near Lexington, had a Cuban theme, due to the fact that Tom owned a cigar shop at the time. Kitty decided against wearing white. Instead, she wore a stunning olive-green gown and told the bridesmaids to wear chocolate-brown versions of what they would wear to a 1930s or 1940s casino in Cuba. The maid-of-honor, her daughter, Katharine, wore a burnt-orange Marilyn Monroe dress. The groomsmen wore Mexican wedding shirts, called Guayaberas, and Tom wore a white linen shirt and pants.

The flowers, which included cattails and white roses, represented family members who had passed away.

A street-festival reception followed the sunset ceremony. Orange paper-lanterns, painted by Kitty, dangled from the trees above, and a band played a combination of sentimental favorites and Cuban songs. The couple opted for flan rather than a wedding cake, and the rest of the spread was also traditional Cuban food. They took a 10-day honeymoon to Puerto Rico, where they had a wonderful time, with the exception of some noisy frogs.

The couple believes patience, humor, and forgiveness contribute to their successful marriage and help them make it when times are tough. "We were so broke we couldn't even pay attention," Tom remembers, but they supported and loved each other along the way.

"When times are down, and you're with somebody that can make you laugh, the small things in life that you can talk to each other are so important in a marriage." Kitty says.

Tom says that what he loves most about Kitty is how she identifies the good in things. "She has this unending well of hopefulness," he says.

Kitty loves Tom's vision: "He's a true visionary. He sees potential that a lot of people don't see, and that's huge for our community, our state and certainly our family."

The Ramseys have been lucky to almost seamlessly combine their two families into one big family of six, with children Stuart and Katharine, both 19, Whit, 14 and Zak, 10. The couple still jokingly gives the advice if you're getting married: "Don't," Kitty says.

"Marry for the money," Tom quips.

But Kitty adds: "You have to have love and trust, but only marry someone that you can see yourself being in an equal partnership with when you die. Be sure to marry somebody who can wipe your fanny, because someday you might need them to do that--and that you'll wipe their fanny. It has to be equal. That's something that people don't think about. It's not just for when you're young and fun, it's also for when you need them, (when they're) at their worst, or when they are most vulnerable.

"In sickness and health and poor and rich and all of that are really part of your partnership agreement," she says.

She pauses and laughs. "OK, that was way too serious."

Tom Ramsey is a freelance food writer for the JFP and BOOM Jackson.

ADORABLE COUPLE! My husband and I have been fortunate enough to hang out with these folks and they demonstrate true love and great fun. So happy to call Tom and Kitty (Titty - sorry couldn't resist) friends! Love you both!