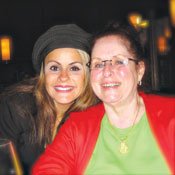 "In my opinion, fusion cuisine is good for all of us learning about each other while eating great food," said Mama Jacqueline (right), sitting next to her daughter Anita.

I am no Julia Child or Rachael Ray, although I do love those sassy hostess aprons they sell at Maison Weiss. You know the ones: lots of puffs of baby pink tulle and girly charm. One day, when I am a full-fledged fusion cook, I plan on getting one of those aprons, slapping on a June Cleaver smile and prancing around the kitchen whipping up a little Euro-Asian fusion feast while sipping on a pink cocktail. Now that's my idea of homemaker heaven.

While I really have no business discussing a "how to" article on fusion cooking, the undeniable fact is that my mother, the ever-lovable Mama Jacqueline, is the greatest fusion chef ever. Mama Jacqueline put the fusion into cooking long before it was fashionable to do so, and her fusion-styled cooking can put a smile on the face of the most persnickety critic, who just happens to be my dad.

You see, my dad is from Kolkata (Calcutta), and my mother is from Montreal, and their marriage was a cultural fusion of East and West that spilled into the kitchen. I grew up on all sorts of delicacies, as diverse as goat and mutton curries to boeuf bourguignon to turkey and giblets to boxed mac and cheese with pancetta. (Some of these culinary delights exceeded my palate range and led to creative uses of my napkin.)

In a telephone interview, I asked master fusion chef Mama Jacqueline, who was excited to have more than three calls in a week from her only girl, about the ABCs of fusion cooking. "While the term ‘fusion cuisine' is new, the concept is as old as the melting pot," said Mama Jacqueline, who speaks in a light and easy French Canadian accent.

"A good example of fusion cooking is Cajun cuisine. The Acadian French people from New Brunswick (where I was born), settled in Louisiana. Instead of using the mirepoix of traditional French cuisine, which blends finely diced onion, celery and carrot, Cajun cuisine uses the ‘holy trinity' of finely diced onions, sweet green peppers and celery," Mama Jacqueline said. "A few dishes that use this fusion technique are gumbos and etouffees, and the results are delicious."

Mama Jacqueline was on a roll. "Then there's Louisiana Creole cuisine, which uses a blend of French, Portuguese, Spanish, Mediterranean and African cuisine with local Indian herbs adapting to the local vegetables meat and fishes and crustaces. So, so good!" Mama Jacqueline added.

In an ode to childhood favorites, Mama Jacqueline also brought up mac and cheese: "The good old macaroni and cheese is now done the Italian way with Italian cheeses, and this is also delicious."

"This is to give you an idea of the very sophisticated culinary world we live in," Mama Jacqueline said. "In my opinion, fusion cuisine is good for all of us (to learn) about each other while eating great food."

In a saucepan combine chicken broth, tomatoes, onion, garlic, ginger, fennel seeds cloves cinnamon, salt, green chili and the spices. Simmer for 20 minutes or until onion and tomatoes are soft. Add the coconut milk and the lime juice. Bring to a slow simmer then turn off the heat.

In a small covered frying pan, heat mustard seeds, dried pepper and curry leaves in oil until seeds start to pop. When popping subsides, pour in the soup and stir.

You can also add vegetables. But if you do, add additional broth.