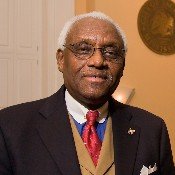 John R. Lynch Street, the history-rich thoroughfare running through Jackson State University, could see new life as a civil-rights corridor. JSU leaders floated a vision of the street as a living museum in a discussion with community members last night.

"This area has so much history that identifying it as what (former JSU) President (Ronald) Mason called 'The Civil-Rights Corridor' seemed natural," interim JSU President Leslie McLemore told the group of roughly 30 attendees.

The discussion took place in the newly renovated Council Of Federated Organizations building on Lynch Street. COFO, a coalition of civil-rights groups, kept its state headquarters in the building from 1961 to 1965. The building fell into disrepair recently, but with the help of a $500,000 U.S. Small Business Administration grant, JSU's Center for University-Based Development has refurbished it.

Marlin King, JSU's in-house architect, suggested that a section of the COFO building could become a museum replicating the organization's offices from the 1960s. Noting that museums rarely make enough money to support themselves "without some type of auxiliary services," King offered the example of the International Civil Rights Center & Museum in Greensboro, N.C. The museum, built on the site of the 1960 Woolworth's lunch counter sit-ins, preserves the store's original lunch counter and stools but also houses event and office spaces.

Audience members responded enthusiastically to King's suggestions that economic development of the corridor could preserve and memorialize "unsung heroes" of local civil-rights efforts. As an example, King offered the possibility of naming an addition to the university's Margaret Walker Alexander Research Center for Phillip Gibbs and James Green--two students who died in a 1970 campus shooting by Jackson police--and Ben Brown, who died in 1967 at the hands of Jackson police.

Large-scale redevelopment efforts will depend in part on outside funding, whether through private foundations, federal earmarks or state funds, McLemore said. The university's vision for the corridor is still taking shape and more discussions with the community will be necessary, he added.

"None of this is set in stone, because we haven't done any of it," he said.

Milton Chambliss, who owns property in the 900 block of Lynch Street, said that he and fellow Lynch Street property owner Lizzie Cooper are eager to cooperate with JSU on the street's redevelopment. Chambliss opposed an earlier 2007 effort, helmed by then-President Mason, to take property in the area by eminent domain.

"Now I'm a willing partner with the University," Chambliss said. "We agree that we need to do it together. We are for whatever takes shape, whether it winds up being a public-private partnership (or) we wind up being bought completely out--at a fair price, I might add. Or, if we're allowed, we'll work in concert with the University to try to get this fully developed."

"We just don't want the property to be taken away suddenly," Clarke said. "We want to make sure it's done fairly."