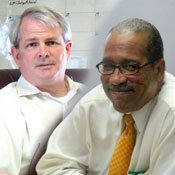 Brent Southern (left) and Melvin Priester, Sr. face each other Nov. 23 in a run-off for Hinds County Court judge.

Hinds County residents in the county's first judicial sub-district have a second decision to make in their judicial election. Special Circuit Court Judge Melvin Priester and attorney Brent Southern will face each other in a run-off Nov. 23.

Unofficial Hinds County Election Commission results show that Priester received 9,211 votes to Southern's 3,959. Challengers Frank Farmer and Trent Walker received 3,026 and 3,612 votes, respectively. With 46.501 percent of the 19,808 total votes, Priester was 694 votes short of the majority he needed to win definitively on Tuesday.

Both candidates said that they looked forward to a run-off.

"It's always good to have another chance to fight for what you believe in and have another chance to get the message out," Southern said. "I just want to continue to focus on my background of hard work in the community, my family background of being dedicated to community development--from my mother running a homeless shelter in Monroe, La., to my sister's coaching and teaching in Texas and Louisiana. That's the kind of background I come from, and that's the kind of person they're getting if they elect me judge."

Southern, a native of Monroe, La., attended the University of Mississippi for both his bachelor's and law degrees. He taught and coached high school sports in Monroe and New Albany, Miss., before law school. After graduating from law school in 1988, he started work in private practice. He currently runs a solo practice in Ridgeland. Southern has coached softball at Jackson Academy, and from 1998 to 2002, he served as president of the board for the Northside YMCA.

Priester is a native of Boston, Mass., and graduate of Boston University. He worked for eight years as a psychiatric social worker before attending law school at the University of Texas at Austin. Priester received his law degree in 1985 and moved to Jackson, where he started a private practice with his wife, Charlene. A former Jackson Municipal Court judge appointed by former Mayor Frank Melton, Priester currently serves as a specially appointed Hinds County Circuit Court judge for the Jackson Enforcement Team. The federally funded JET program dedicates law enforcement and legal resources to serious violent and drug crimes.

"When people vote for you because they care about experience, you can basically count that those voters are going to come back and support you in a run-off." Priester said.

Priester added that he was proud of his diverse base of support.

"If you look at the numbers, you'll see that my campaign won in predominantly black precincts, such as New Hope Baptist Church, as well as in predominantly white precincts such as Woodland Hills," Priester said. "That diversity proves that citizens of Hinds County know that what matters in judicial elections isn't race or who coached your kids in softball. What matters is who has real experience as a public servant."

Southern pointed to his time with the Northside YMCA as a sign of his connection to a variety of voters.

"That facility was right there between east Jackson and west Jackson residents and was a place where all could gather, regardless of financial status or anything else," Southern said. "I felt like we were able to do great things there."

Ward,the picture looks like Brent is holding Melvin in his lap. I know that this is not a political statement, but. Good article. I live in that district and will take a good look at both candidates now that the field has been narrowed. There are tons of Priester signs. His family has done a great job in getting the message out.