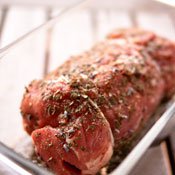 It's difficult to write about spring food when it's wet and cold outside—when the groundhog is predicting that a lovely, warm spring is not "right around the corner." Because of a bizarre travel schedule, I am writing this article way ahead of time (while it is still winter) and through the magic of the print media, you are reading it in the spring.

Despite the fact that you are probably perusing this page while lounging in the sun on some warm patch of green grass, wearing a T-shirt and cut-off jeans, I wrote it in flannel PJs staring at a barren brown lawn and a pecan tree that hasn't seen leaves in quite some time. Because of this circumstance, the topic of this piece evaded me for quite a while. I thought about Easter and perhaps a coy recipe for Lapin au Vin, but I didn't want to come off too snarky and make children cry. Pasta primavera? Too predictable. Devilled eggs? Way overdone.

I love to combine the flavors of the Far East with those of the Southwest. Both cooking traditions incorporate bold spices along with a balance of heat/salt/sweet/acid. In this dish, the pork receives the Asian treatment and the salsa takes its cues from the Southwest.

Our cocktail is a variation on a New Orleans favorite: the Ramos Gin Fizz, invented in New Orleans in 1888 by Henry Ramos.

Ramos moved to New Orleans from Baton Rouge and purchased a bar called the Imperial Cabinet. Locals called the place "the Cabinet" and flocked there to order Ramos' signature drink, the New Orleans Fizz. In later years, when other bars started copying his drink, Ramos left the Cabinet and opened The Stag where he changed the name of the beverage to reflect his own moniker.

The drink and the new bar proved so popular that Ramos employed up to 35 "shaker boys" per shift to stand behind the bar and create these frothy concoctions. Even with this army of shakers, during the 1915 Mardi Gras season, newspapers reported lines stretching around the block and customers waiting up to an hour to sample "the drink that tastes like a flower," as one patron described it.

Be patient when making these cocktails. They are definitely old school and require time and effort to get right. When you do, you'll find it's well worth the wait. The recipe calls for raw egg whites. Some people get a little frightened by this, so you can substitute powdered egg whites if you desire.

Put your serving glasses in the freezer at least ten minutes before making this cocktail.

Cut the lime into thin wedges for garnish. Fill cocktail shaker with ice cubes one third full. Combine all ingredients, except for the seltzer water, in the shaker. Close tightly and shake vigorously for at least two minutes or until the mixture is frothy. Strain into a chilled glass and top with an ounce or two of chilled seltzer water. Garnish the glass with a thin slice of lime.

Remove silver skin from tenderloins and discard. Peel and thinly slice the ginger. Roughly chop the prunes. Combine all ingredients in one-gallon zip-top plastic bag. Make sure you remove the air from the bag and that the tenderloins are completely immersed in the liquid. One way to accomplish this is to leave the top of the bag open and slowly lower the bag (bottom first) into a sink full of water until just the top of the bag is out of the water. Quickly close the bag and remove from the water. Place the bag in the refrigerator for at least four hours (overnight would be optimum).

Grill the tenderloins for about 16 minutes, turning a quarter turn every four minutes. This time can be adjusted according to their size. They are ready to come off the grill when a thermometer inserted into the center of the meat reads 145 degrees. Remove when done, cover with foil and allow to rest for ten minutes before carving.

Spoon the salsa onto the bottom of a large platter. Slice the tenderloin on a bias and place the pieces on top of the salsa. Garnish with remaining chopped cilantro.

Finely chop the tomatoes, garlic and cilantro, reserving about a tablespoon of the chopped cilantro for garnish. Remove the husks from the corn. Mince the jalapeno pepper. Reserve the seeds for hot salsa or discard them for a mild salsa. Slice the onions and the peppers into 1/2-inch thick rings.

Use half the olive oil to brush the onions, peppers, green onions and corn, and place them on the grill. Cook the vegetables until they begin to soften but retain some crispness. This should take just a few minutes and can be done while the pork is resting. Remove the vegetables and chop the onions, peppers and green onions. Slice the corn from the cob into a large bowl and combine with all other vegetables. Add vinegar, remaining olive oil, juice from the limes and tequila. Toss all ingredients and add salt as desired.