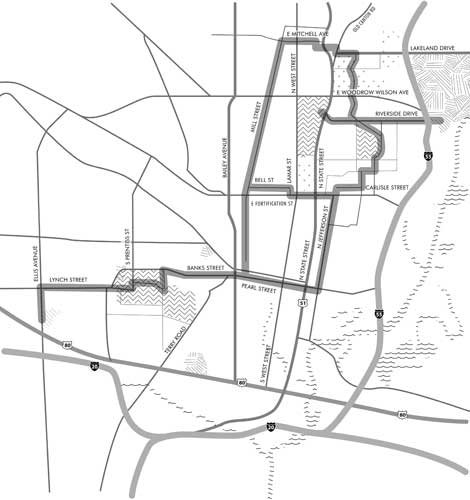 Thriving cities take the focus off cars and place it on people. For a city to be liveable, city planning shouldn't solely accommodate gas-guzzling metal boxes, but should also include the people who live there. Ideally, a city should be well organized so people can ride their bicycles or walk to work, school, restaurants and shops. One way to have a more sustainable city is to turn the streets into complete streets—streets that consider the needs of all modes of transportation—to allow motorists, bicyclists and pedestrians equal access to roads.

The map (click here for a larger version) suggests where multi-use trails could be located in parts of Jackson to connect residents to schools, grocery stores and other amenities.

Benefits of biking and walking:
Reduces air, water and noise pollution, as well as greenhouse gases.
A four-mile trip on a bicycle keeps 15 pounds of pollutants out of the atmosphere.

How to make your city bike-friendly:

1. Evaluate your community with the League of American Bicyclists' scorecard.
2. Find out which city leaders you will have to pitch the Bike Friendly application to, and begin to plan your approach.
3. Gather support from the community: bicyclists, local politicians and citizens.
4. Request a meeting with government officials.
5. Get specific commitments, and then follow up.
Source: http://www.bikeleague.org

What is the Central Mississippi Planning and Development District?

CMPDD is a nonprofit planning organization serving Copiah, Hinds, Madison, Rankin, Simpson, Warren and Yazoo counties that is currently working with cities to evaluate existing bike paths and trails, and to map where cities would like to place more paths and trails. By this fall, the CMPDD expects to have a regional bike plan for interconnecting different city and county bike paths and trails.

How do you make streets liveable?

Communities can't exist where there is no communal space. Not having walkable public spaces hinders the development of community.
Necessities for street life:
• Meaningful destinations—places worth going that can be accessed on foot.
• Safe streets—streets designed for pedestrians as well as motorists. Narrow streets reduce speeding. In Portland, Ore., the organization "Skinny Streets" recommends that streets in residental areas are 20 feet wide.
• Comfortable streets—streets with well-defined boundaries and flat street walls give a sense of containment and comfort.
• Interesting streets—streets should convey the message that people live there, thus making them interesting to look at as one walks by.

Source: " Suburban Nation: The Rise of Sprawl and the Decline of the American Dream," by Andres Duany, Elizabeth Plater-Zyberk and Jeff Speck

Clay Hays, Chairman of Greater Jackson Partnership Board and member of the Bicycle/Pedestrian Facilities Subcommittee of Technical Committee
[e-mail missing]
601-948-7575

Being obese or overweight causes around 300,000 deaths in the United States each year, according to the surgeon general. In 1969, 50 percent of students walked to school, whereas in 2004 only 14 percent of students walked to school. The average amount of miles Americans drive per day have doubled since 1969 to 30 miles.
source: http://www.railstotrails.org

Great article, Jesse. I just wanted to add a quick call to action if you are interested in Bike Advocacy. Join the Bike Advocates on Facebook to keep up with our efforts to make Jackson more "bike friendly" Join us and let your voice be heard! http://www.facebook.com/pages/Jackson-Bike-Advocates/158677233920?ref=ts Some of our long term goals include: complete streets, increasing bike safety, bike friendly policy reform, creating more bike routes and meeting the needs of urban cyclists in the city of Jackson. We need your voice, please join us in our efforts!

Also, a VERY important new addition to making Jackson more bike friendly and safer for cyclists in the BRAND NEW legislation that was passed: Effective July 1st, “The John Paul Frerer Bicycle Safety Act” includes a 3 foot passing requirement, does not allow motor vehicles to block a bike lane, and makes it unlawful to harass, taunt or maliciously throw an object at or in the direction of any person riding a bicycle. Breaking this law is punishable by fine and possible imprisonment. It is OUR responsibility to make motorists and cyclists aware of this new law! Remember, 3 Feet please! (This bill is named after a Tupelo teen who died while cycling in August).