The High Cost of Calories 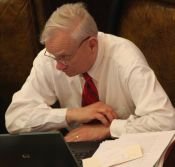 Rep. John Mayo called his soda tax bill, which died in committee this year, a matter of state responsibility.

A state tax on sodas, sponsored by Rep. John Mayo, D-Clarksdale, was effectively dead on arrival at the state Legislature this year, given the difficulty of passing any revenue measure during an economic recession. But the fate of Mayo's proposal illuminates the challenge in addressing Mississippi's obesity epidemic through legislation, and especially, taxes.

Soda tax proposals have drawn attention recently in cash-strapped states and cities as a way of raising money while improving public health. Arkansas and Tennessee already have small soda taxes. State legislators in Kansas are currently considering a tax that would raise the cost of a 12-ounce soda by 10 cents; New York is weighing a one-cent-per-ounce tax.

Arguments for a soda tax usually cite the social and economic costs of obesity. While a personal choice, the thinking goes, sweetened beverages can lead to obesity, which increases health-care costs. Obesity-related health care cost the state of Mississippi $757 million between 1998 and 2000, according to the Centers for Disease Control.

Raising the price of sodas is a way to deter—or, at least, accurately price—costly behavior, Mayo argued at a hearing on his bill last month. "I do not disagree with anybody that drinking a sugared-up soda, not exercising and not eating properly—and, quite frankly, being fat—are personal choices," Mayo said. "They are personal choices. But encouraging a healthy population, protecting the taxpayers' dollars, is a state responsibility."

Mayo's bill directed 80 percent of the revenue generated by the proposed tax to the state's general fund and 20 percent to a handful of state agencies—including the Education and Health departments—for obesity-prevention programs.

House Ways and Means Committee Chairman Percy Watson, D-Hattiesburg, never brought Mayo's bill up for a vote in committee, however, and the measure died.

Mayo has proposed bills aimed at other facets of the obesity crisis, including a bill to exempts fruits and vegetables from the state's grocery tax.

Supporters of a soda tax might be tempted to proffer a tax as a means of funding education, health care or other obesity-related programs. That would be a mistake, Mitchell said. When the Health Advocacy Program advocated for an increase in the state's cigarette tax, it repelled some legislators by calling for the tax's revenue to be spent on Medicaid.

"It's just a lot more palatable to legislators to have the revenue open-ended," Mitchell said.

A 1-cent-per-ounce tax on sodas could bring the state $153.2 million, according to a report prepared at Mayo's request by the Stennis Institute of Government at Mississippi State University. A 2-cent-per-ounce tax would generate $215.9 million.

Moreover, Sivak said, a soda tax is regressive: Poor Mississippians are as likely to buy soda as the wealthy, but the excise tax would claim a greater portion of their income.

A regressive tax may still be worthwhile, though, according to an opinion published in the New England Journal of Medicine in April 2009. Despite the regressive nature of such a tax, "The poor are disproportionately affected by diet-related diseases and would derive the greatest benefit from reduced consumption," argued CDC director Thomas Frieden and co-author Kelly Brownell.

While the confluence of cultural, genetic, behavioral and dietary factors that cause obesity is complex and still unclear, nutritional research has repeatedly found that drinking sugary beverages is linked to weight gain. And studies from Johns Hopkins University and elsewhere have confirmed that reducing consumption of sweetened beverages promotes weight loss.

Research is less clear on the effects of a soda tax on soda consumption, but a study published in the March issue of Archives of Internal Medicine suggests that increases in the price of soda and pizza are associated with weight loss.

At the committee hearing on his bill, Mayo grew visibly exasperated with questions from other committee members that suggested his bill made sodas a scapegoat for a massive, complex problem. The state has to upend the economic status quo that made unhealthy foods and drinks cheaper and more attractive than healthy ones, Mayo argued.

"I must be a very dangerous person for actually proposing something to solve a problem," Mayo said. "If this isn't the solution, then come up with a solution."