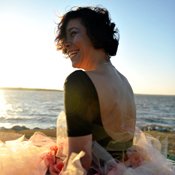 Nineteen months after a fall that nearly killed her, Nicole Marquez will dance at the Ask for More Arts Benefit March 27 at The Auditorium in Fondren.

On Saturday, Aug. 30, 2008, the superintendent of Nicole Marquez' apartment building in Harlem found her unconscious and bleeding on the bottom of the structure's airshaft. Barely alive, Marquez had broken her neck, her lower back and pelvis, and all the ribs on one side of her body. One of the ribs had punctured and collapsed a lung, and she had lost a lot of blood.

A dancer and actress, Marquez drifted in and out of consciousness for days, clinging precariously to life. "I didn't want to believe I was in the hospital," she told the Jackson Free Press eight weeks after the accident. She thought she was in her apartment having a bad dream.

It wasn't a dream. Doctors gave her less than a 50/50 chance of walking again, But as she told the JFP after she had been transferred back home to Methodist Rehabilitation Hospital in Jackson, she was determined to dance again: "You can't stop this dancer—trust me. I've got a whole lot of living to do."

I sat down with Marquez and her assistant and friend Caitlin McNally on a sunny afternoon outside Basil's in Fondren. Marquez had a big smile on her face full of freckles, radiating positivity even before she spoke. She and McNally, who describe themselves as "silly," frequently stopped to talk to people, whether they knew them or not, as they passed by.

How is therapy going? What sorts of things are you able to do now that you haven't been able to do since the accident?
Imagine not being able to dress yourself or wear your own clothes, and that was totally me. Just yesterday I was able to put on a pair or socks and tennis shoes, and I can get dressed by myself. Being able to dress myself in privacy is really nice. (Therapists have) been teaching me to be more independent because I'm 27, and I live at home with my parents. So far it's been going pretty good. I can't complain. I mean, I could, but it wouldn't do me any good.

What can you tell me about the Ask for More Arts benefit at The Auditorium.
I'm going to be dancing in it. Now granted I'm not going to be doing flips and turns and pirouettes and splits, but it's the start of something. You have to remember that a couple years ago, my doctor's prognosis in New York for my outcome was not so good. I just wanted to get better. I really don't look good in a wheelchair—it's just a fashion faux pas. Even though I could say, "Never say never," I'm human. It scared me when they said I was never going to walk again. And yeah, I've had a lot of dark moments, but now I can lift the remote. I can type on the computer. I can talk on the phone. I can be 27.

What sort of preparation has gone into being able to dance again?
Hard work. I've wanted to do it from the time I even thought about having this event. I didn't know the outcome as far as what all I'd be able to do. But I had certain goals for myself that I wanted to set, and slowly but surely it's piecing itself together.

Also, Caitlin's made my life really great the last couple months. Even though she's just assisting me with things I'm not able to do, she still pushes me, which is great. To a degree I've kind of been pampered the past couple months. People have been putting on my clothes and cleaning my room and driving me around. It was fun while it lasted, but now it's time to see what's up on the horizon.

What have you been doing aside from therapy since you've been back in Jackson?
Right now I'm doing motivational speaking, which is really weird—talking about myself. It's turning my situation around into something positive instead of crying about it. The world is the ugly, cruel place, but at the same time there's lots of beauty all over. And right now being in the dance studio with those girls preparing for this event, it's like the dance studio is my sanctuary. In that moment in time, even though we're there for two hours twice a week, in that moment time doesn't exist. My worries don't exist. I don't care about anything else. It's just like any art.

What do you plan to do in the future?
It's getting close for me to write a book, so that's something that I'm probably going to start working on this summer. Also, I have a lot of soul searching to do. My independence and identity was, I don't want to say taken away from me, but it's in the closet somewhere. It's about time for me to fish through all the boxes and find it. And for the most part, I'm really happy. As long as I can laugh and breathe and walk, I'm OK.

I'm excited and nervous about the future. I don't know what's in store for me, but at the same time I don't want to know. Each day is just like opening a Christmas present.

Can you tell me about the benefit at The Auditorium?
Taking the thing that you love the most and putting it on hold is like a piece of you missing. In June, I knew that I wanted to do something to give back to the community, because when I had my accident the entire community came out of the woodwork. The event is in conjunction with Parents for Public Schools and its program, Ask For More Arts, which promotes arts in education. I'm a firm believer that those turkeys you draw (by) outlining your hand (as a kid), that changes your life. I wanted to give back, but I wanted to put my spin on it.

"An Evening of Hope," a fundraiser for the Ask For More Arts initiative, is Saturday, March 27, at The Auditorium. Doors open at 5:30 p.m. and the event includes: signature drink; three-course meal; live music; art auction; video presentation; a performance choreographed by Marquez; and her solo dance. Tickets are $75. For information, call 601-969-6015, or visit http://www.ppsjackson.org.

The interview with Nicole Marquez (joined by Susan Womack, executive director of Parents for Public Schools of Jackson) is now up on the JFP Radio site: http://www.jfpradio.com. Click the 3/25/10 show.